Lord-Castellants are the Guardians of Gateways, Keepers of Keys, and Bearers of the Warding Luminous. Each is an officer, part of the auxiliary command within a Stormhost’s main chambers. Lord-Castellants are masters of defensive warfare and are often tasked with holding vital ground.[1a]

Striding the battle line, a Lord-Castellant is an indomitable force, a walking bulwark. His mere presence emboldens the fighting spirit of his battle brethren. When the powers of his warding lantern are unleashed, a mystic effect washes out with golden rays. Sigmarite plate glows as barriers of arcane protection enshroud it. Nearby Stormcast Eternals are heartened, while wounds and rents in body and armour alike are healed.[1a]

Only the most uncompromising of mortal leaders are chosen to become Lord-Castellants. Their natural tenacity is enhanced by their Reforging, creating leaders as unyielding as sigmarite. When an aspirant proves worthy of this rank, they are ceremoniously given a halberd and the sacred warding lantern. They are sent alone from Sigmaron on a final proving quest into the eternal winterlands of Azyr, the towering Boralis mountain range. There, each must prove himself by entering the madness-inducing mists that hangs over those peaks. Amidst hunting Gryph-hound packs and howling beasts he confronts the greatest fears of his former life. Only those who return from that quest can assume their new duties. These masters of defensive warfare are charged with guarding the Stormhosts’ fortresses, though they are also often called upon to anchor battle lines upon the field of war.[1a] 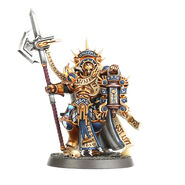 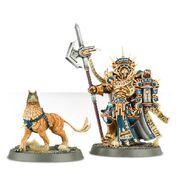 Add a photo to this gallery
Retrieved from "https://ageofsigmar.fandom.com/wiki/Lord-Castellants?oldid=8744"
Community content is available under CC-BY-SA unless otherwise noted.