Lord-Celestants are the raging centre of each storm-strike.Thundering commands, it is they who direct the Stormcast Eternals to battle, they that lead entire chambers into the fray.[1a]

Wars can be won or lost by leadership and none know this better than Sigmar. For this reason, the God-King himselfchose each of the Lord-Celestants, selecting only the best of the best – the greatest and most exceptional of mankind’s heroes from across the realms. After their Reforging, they would be the field commanders and war-captains of Sigmar’s new armies. Upon them, more than any others, would rest the difference between glorious triumph and bitter defeat.[1a]

Knowing well the harsh and unforgiving trials that would soon beset his Lord-Celestants, Sigmar bestowed upon each an even greater measure of his divine might. Thus did the strong grow stronger, their inherent heroism augmented by celestial energies. They became paragons of courage, duty, and martial prowess.[1a]

Lord-Celestants can bend broadswords with their hands, pulp foes with each meteoric swing of their tempestos hammers, or cut them in twain with sigmarite runeblades. Yet it is not for deeds of strength alone that Sigmar has chosen his Lord-Celestants, for it is their task to lead a Strike Chamber.[1a]

Each battle of the Stormcasts is a matter of great import. Although they are immortal, Reforging can take great lengths of time. Thus each warrior lost lessens a chamber’s strength, just as each scrap of territory that remains in the hands of Chaos leaves the realms that much closer to eternal damnation. In this new war that Sigmar has launched, there are no minor losses.The Stormhosts must strike hard, and they must triumph. It is the Lord-Celestant’s sacred duty to lead his forces as they seek those victories.[1a]

A Lord-Celestant is armed with a fearsome Sigmarite Runeblade and a Warhammer, and wears a Sigmarite Warcloak. A Lord-Celestant on Dracoth wields either a Tempestos Hammer, a Thunderaxe, a Lightning Hammer or a Stormstrike Glaive. Some also carry a Sigmarite Thundershield. In any case, he rides a Dracoth which fights with its ferocious Claws and Fangs. A Lord-Celestant on Stardrake wields a Celestine Hammer or a Stormbound Blade, or an enchanted Sigmarite Thundershield. He rides a formidable Stardrake to battle, which rends its prey with its Great Claws.[1c][1d][3c][3d] 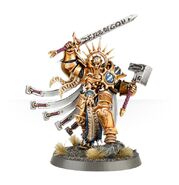 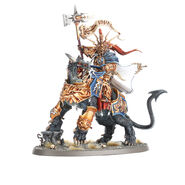 Retrieved from "https://ageofsigmar.fandom.com/wiki/Lord-Celestants?oldid=10107"
Community content is available under CC-BY-SA unless otherwise noted.