Lord-Relictors are high ranking commanders, second in authority only to a Lord-Celestant over a Strike Chamber. They are the Masters of Celestial Lightnings, the Storm Summoners and Bearers of the Bones of Heroes. It is they that see the spirit world, and view the soul eternal.[1b]

Lord-Relictors wield the power celestial, for they are Sigmar’s priests, his lords of living lightning. Theirs is the ability to summon forth the storms of Azyr, and they use those eldritch energies either to smite the foe or to reinvigorate the bodies of their fellow Stormcast Eternals.[1b]

Across the Mortal Realms a battle rages unseen: the War of Spirits. Many opposing powers covet souls, foremost amongst them the all-consuming Chaos deities, as well as Nagash, self-proclaimed Lord of the Underworlds. In granting his new army immortality, Sigmar needed to anchor the souls of each of his Stormcast Eternals to Azyr and the divine tempest. Thus was born the role of the Lord-Relictors.[1b]

Only the most noble, most heroic of Mankind’s conjurers, shamans, or prophets are chosen by Sigmar to become Lord-Relictors. Only they have the ability to incant the summonings and wield the celestial magics that will call forth the thundering aetheric powers.Yet no matter their might in the mystic arts, only those aspirants who have the deepest faith in themselves and in Sigmar survive the final test of Reforging.[1b]

Those who would become Lord-Relictors must endure the twelve rituals of the archaistic Temple of Ages. Few who enter beneath the arches of that impossibly ancient building ever return. Those that do bear the distinctive devices of their new office: mysterious relics and Mortis armour.[1b]

It is the task of a Lord-Relictor to keep the souls of his chamber’s brethren firmly tethered to Sigmar and the Celestial Realm. With frequent binding rituals and lightning-wreathed blessings, Lord-Relictors ensure that should a Stormcast Eternal fall in battle, his spirit will heed only the call of Sigmar, ascending as a scintillating bolt back to the Heavens. The role of spirit-warden is but part of a Lord-Relictor’s duties. He is also an advisor to his Lord-Celestant, and leads formations in his stead, or at his command. In battle, the sinister-looking Lord-Relictors channel the celestial storm, calling upon searing bolts to aid their chamber.[1b] 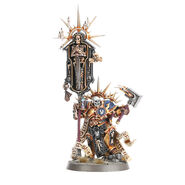