To witness a Lord Executioner is to stare death in the face. Sent to claim the lives of those who have escaped the cold justice of Shyish, the spirits of the wrongfully executed drift around him, crying out their anguish into the night.[1b]

In the living world executioners are tasked with the ending of life, often by axe stroke or noose. Those that knowingly slay the innocent as well as the guilty - claiming that they are 'just doing their duty' - attract the gaze of Nagash. The same is true for those that enjoy their work too much, even those that seek to repent.[1a]

In death - especially those slain by the relatives of the innocents they slaughtered - these headsmen are remade into the spectral form of a Lord Executioner. They are charged by Nagash to slay heroes, champions, kings and anyone that defies his laws.[1a]

Lord Executioners each bear a massive decapitating axe, and some carry the phantasmal echoes of accoutrements from their past, such as a gallows, torture wheel or stretching rack. The spectres are also surrounded by skull-faces wreathed in balefire. These visages are the remaining spirits of innocents the executioner slew in life. They harass their killer, haranguing him constantly, but also warding him against dangers, blocking enemy spells and sword blows. They do this not as a kindness, but so he can never escape the executioner's bloodthirsty work.[1a]

A Lord Executioner is armed with a Decapitating Greataxe.[1b][2] 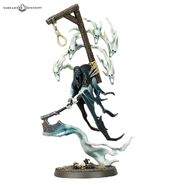