A Maw-Krusha is a hulking, powerful beast native to the realm of Ghur often used as a mount by the Ironjawz tribe of Orruks.

Tiny-minded and short-sighted, the thuggish Maw-Krushas barrel across the landscape pulverizing anything in their way, be it trees, settlements or screaming people. Their bellow is loud enough to rupture organs, pop eyeballs and pulverize bones.

They are even capable of a semblance of flight with their stubby wings, though it has been suggested that this is more the result of gravity simply not wanting to mess with them.

Most creatures have the good sense to steer well clear of Maw-Krushas, but not the Orruks of the Ironjawz tribe. At first, Maw-Krushas were a chance for brave Ironjawz to prove their mettle -- often with fatal results.

Then, some Megabosses managed to "tame" a Maw-Krusha, either by yelling right back into their face or clambering up on their back where they couldn't reach them and battering them about the head until they submitted.

Maw-Krushas never truly accept their riders and need constant reminding of who is in charge. Fortunately, the monsters enjoy smashing stuff just as much as Ironjawz do, and can be distracted by a good fight. 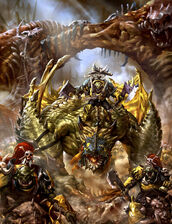 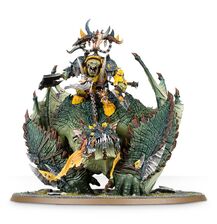 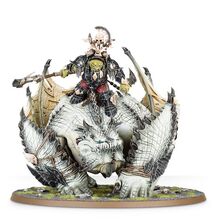 An Orruk Ironjawz Megaboss on a Maw-Krusha.