A Megaboss is the undisputed leader of his Ironjawz. Hordes of orruks follow the hulking warlord into the heart of battle where the best fighting is found. Clad in layers of iron and wielding massive weapons, Megabosses take great pleasure in besting enemy champions, while their barely contained Waaagh! energy drives their boys into a frenzy.[1]

It is well known among the Ironjawz that the more fights an orruk wins, the bigger they become, their muscles thickening and their teeth getting longer as their body grows. Understandably, then, Megabosses are massive, so huge they overshadow even the mightiest opponents. Some Ironjawz reckon that the reason Megabosses are the biggest is because Gork (or maybe Mork) is inside them, trying to get out. Supposedly, if they get big enough one day, they will become one of the gods themselves and go around punching down mountains or stomping on fortresses. Others say Megabosses have always been the biggest, following the trusted orruk logic of ‘it was like that when I found it’.[1d]

Ironjaw Megabosses are surpassingly brutal warriors. Whether clanking along on foot, or bawling from the back of a Maw-krusha, they batter down enemies like a landslide of fists. Given their size and peerless combat skills, Megabosses get to wear the heaviest armour and have the biggest choppas. The best bits of iron taken from the battlefield will often find their way to the Megaboss, where he will beat them onto his body, giving his armour its own suit of armour. In addition to layers of the shiniest iron, Megabosses hammer on trophies – the skulls of tough-looking creatures, bits of broken weapons or symbols ripped from the banners of enemies that looked important.[1d]

The power of a Megaboss rests in more than just muscle and iron, and as focal points for the Waaagh! they have a bestial charisma that draws other Ironjawz towards them from all directions. The destruction wreaked by a gathering Waaagh! is often almost as bad as the event itself.[1d]

Competition between Megabosses is frequent, and often includes headbutting contests, orruk hurling or kill tallies. The latter practice is particularly contentious, as only an exceptional Megaboss can keep track of the numbers involved after the opening moments of a battle. The contest generally devolves into a lot of yelling,and, inevitably, fighting.[1d]

Megabosses enter battle armed with a huge Boss Choppa in one hand, while their other hand is sheathed in a Rip-tooth Fist made of heavy iron.[1g] 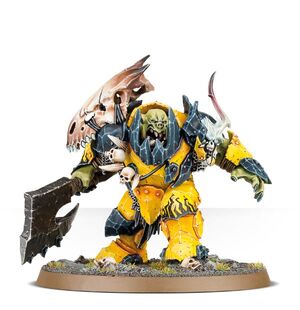 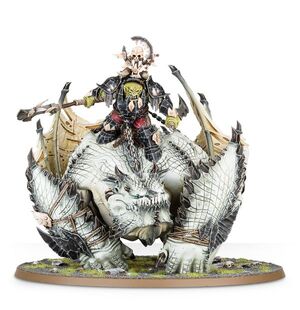