Blood Sisters are powerful warriors used as bodyguards to High Priestesses or Bloodwrack Medusae, or as a potent vanguard for the war covens. Each Blood Sister is equipped with a heartshard glaive - a heavy polearm ideal for driving through armour and ribs to cut out an opponent's heart. Blood Sisters can also channel the blackness of their tainted souls into a strike known as the 'scath touch'. The lightest contact from such a blow can transform the victim into coiling mists, which solidify into an unmoving crystal statue that is still horrifically aware. As sensualists, the Blood Sisters consider an eternity of sensory deprivation the worst of all possible fates, hence their delight in inflicting it upon others. The ultimate in cruelty is for a Blood Sister to thrust her glaive quickly enough to slice out a foe's beating heart even while the scath touch turns them to crystal. To be trapped forever in a state of unbearable pain is but a small sample of the torment the Melusai themselves have endured.

Fheltoіir placed the dripping heart in the altar's brazier and stepped back to watch the flames feed upon the sacrificial organ. The unnatural red light cast eerie shadows across the towering statue of Khaine. Fheltoіir did not cross her daggers over the blood-fuelled fire, nor did she recite the traditional mantras. Instead, she spoke her own benediction.

'Here, Khaine, is the heart of the Hag who thought to lead our sisterhood. I hated her for she favoured the High Oracle over you, but I killed her because she was weak.' Fheltoir did not know if her god would hear, or how he might react, but she did not expect what happened next. Agonising pain paralysed her, as her body began to transform into crystal.

'Not wise...' hissed a voice from the shadows. Up rose Scala, a Melusai of the Blood Sisters and Keeper of the Shrine. 'It is the High Oracle alone who speaks with the Word of Iron.' 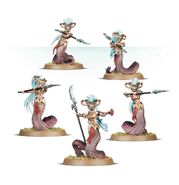 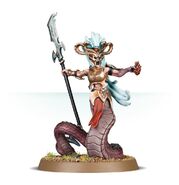 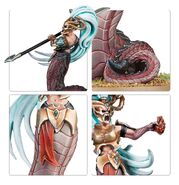 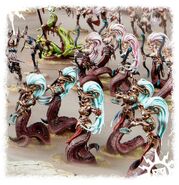 Retrieved from "https://ageofsigmar.fandom.com/wiki/Melusai_Blood_Sisters?oldid=8713"
Community content is available under CC-BY-SA unless otherwise noted.