The Mortal Realms, also called the Eight Realms, are a group of eight expansive planes of existence floating within the Aetheric Void of the Cosmos Arcane that were first revealed to the god Sigmar by the Great Drake Dracothion. They were born out of the destruction of the World-That-Was during the End Times and coalesced from the magical energies and physical remnants of that lost world which remained behind after its dissolution.[1][2][3]

The Mortal Realms are physical embodiments in roughly spherical form of the eight Winds of Magic that once were wielded by the mages and sorcerers of the World-That-Was.

These aetheric energies flowed out uncontained into the void once that world was consumed by Chaos.

They gradually coalesced over the passing aeons into eight new planes of existence defined by the characteristics that embodied their dominant lore of magic. In time, they became able to support new life.

Many of the souls of the people of the World-That-Was were reborn as mortals of the Eight Realms. Several of the greatest and most powerful of those essences became the Ascended deities of the new realms.

Following the invasion of the Mortal Realms some centuries ago by the forces of Chaos, initiating what became known as the realms' Age of Chaos, the Chaos Gods' Chosen Archaon spread his domain across seven of the eight Mortal Realms, sparing only Azyr, the Realm of Heavens from the destruction wrought by Chaos.[5]

In recent times, the Ascended god Sigmar has led the forces of Order in taking back many of the Mortal Realms from the rule of Chaos, establishing new settlements of the Free Peoples and helping to reinforce those uncorrupted mortal nations that survived the long reign of Chaos. This period in the Mortal Realms' history is known as the Age of Sigmar.

Following the destruction of the World-That-Was, the aetheric energy and remnants of physical matter released by the victory of Chaos and the unmaking of that world gathered together into the eight "realmspheres" that were scattered throughout the Aetheric Void of the Cosmos Arcane. Though separate from each other, these realms are still linked.

Azyr can be seen from the other realms as a glowing star in the sky.[6] The realms are connected by the mysterious constructs known as "realmgates," but are also linked by the stars above.[4]

The individual realms aren't infinite in size, but they are massive, each much larger in itself than the World-That-Was.

In the metaphysical centre of each of the realms, reality is stable and mortal civilisations can be created.

Towards the edges of each realmsphere, the stable physical laws of reality tend to break down and the pure magical energies that actually sustain and define each individual realm will rip travellers apart into their elemental components.[6] 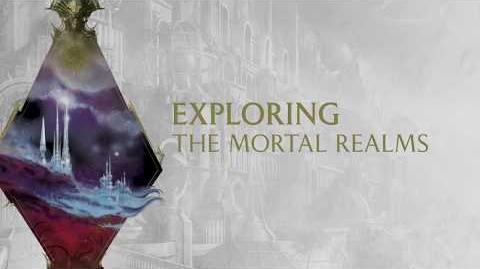