No enemy spell is safe from the diabolical hunger of the Myrmourn Banshees. They haunt the Mortal Realms in search of magic to consume and living foes to stab. Even the most potent of wizards is powerless before them.[1b]

The Myrmourn Banshees have a diabolical hunger, for they feast solely upon magic. No enemy spell is safe from the ravenous spirits, and they haunt the Mortal Realms in search of arcane energies to consume.[1a]

They are drawn to magic as carrion are drawn to the dead, and such is their bitterness towards life that any mortal creature in their way is likely to receive a swift jab from their cursed chill daggers.[1a]

Once, these women were practitioners of magic and seekers of eldritch knowledge, yet in their studies of lore they failed to pay proper respect to the Supreme Lord of the Undead. Upon their demise, Nagash decided that since in life they desired magic so much, they should continue that way in the afterlife.[1a]

Wrapped in tattered robes and funeral shrouds, Myrmourn Banshees have lost the ability to use their physical senses, and can now only detect the magic that they crave and the living creatures that they jealously detest. An opposing wizard has little chance of successfully casting spells near a large enough pack of Myrmourn Banshees, for they will simply devour incantations before they can have any effect. The sudden infusion of arcane energies causes the lithe spectres to gleam with fell power - especially their chill daggers - though it does nothing to sate their greed for more magic.[1a]

A unit of Myrmourn Banshees has any number of models, each armed with a Chill Dagger.[1b] 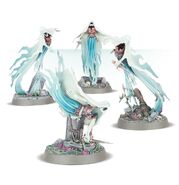