If the Namarti Thralls provide the front-line infantry of the Idoneth Deepkin phalanxes, the Namarti Reavers supply the archers and scouts. The Akhelians recognise the tactical need for reconnaissance, picket forces and massed missile fire, but regard such duties as beneath their esteem. Thus, the Reavers are assembled from the lithest and quickest of the Namarti. Their weapons training concentrates upon how to swiftly aim and fire the silent whisperbow, as well as how to defend themselves with short keening blades designed for stabbing.

In battle the Namarti Reavers move quickly, like the bow wave that advances before the coming storm. They probe defences, seek out vulnerable quarry and harry the enemy's most formidable war assets. With their deadly volleys of arrows the Namarti Reavers distract the enemy, pulling their attention away even while the Akhelians line up devastating charges.

Despite their lack of eyesight, Namarti Reavers are uncannily accurate with their bow fire. They aim by sensing changes in pressure within the ethersea, and can trace electromagnetic pulses in the same manner as many of the predators that stalk the pitch-black waters of great depths. So keen are these senses that the Reavers are able to easily make shots that those who see by conventional means would deem difficult if not impossible. There is a drawback, however, for although the ReaversвЂ™ senses are highly attuned, their field of perception is not as far-reaching as eyesight, and so they must remain within a certain distance of their target lest they lose track of it. 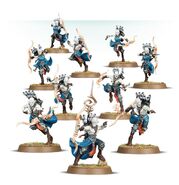 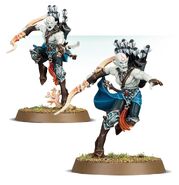 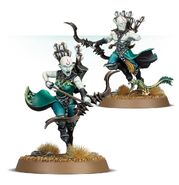 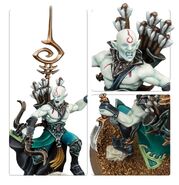 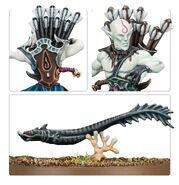 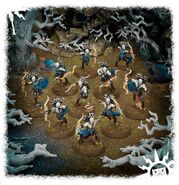 Retrieved from "https://ageofsigmar.fandom.com/wiki/Namarti_Reavers?oldid=9514"
Community content is available under CC-BY-SA unless otherwise noted.