Start a Wiki
Like all aelves, Namarti Thralls possess a physical grace that to other races appears almost supernatural. The Thralls march to war for the Idoneth as the main body of infantry, and it is their task to screen their comrades, then to engage and hold the foe in place. This allows the swifter-moving Akhelians a chance to strike where they deem best. It is a grim prospect, for casualties are often high amongst the Namarti Thralls, but it is a duty they willingly accept. Although they often resent their lower-caste status, the Namarti realise that every successful raid secures more souls for their enclave. This resource is first used to ensure the survival of newborn Namarti, but the excess is used to replenish the diminishing souls of the adults. Such motivation is more than enough to ensure that the Namarti Thralls are caught up in the tides of war, ever eager to capture more spirit-stuff.

In battle the Namarti Thralls fight with an array of weapons known as lanmari - two-handed swords, great scythe-axes or polearms of intricate design. The weight and reach of such weapons are useful when driving off the enormous sea creatures that bedevil the Idoneth enclaves, while their broad blades are suited to scything through the teeming swarms of predatory fish that seek to prey upon the aelves. 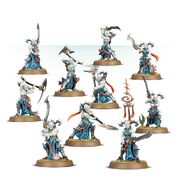 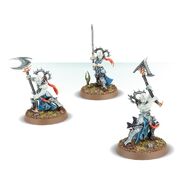 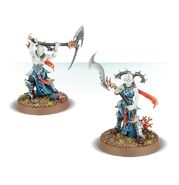 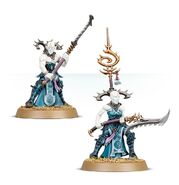 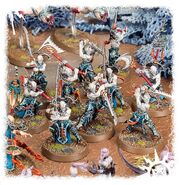 Retrieved from "https://ageofsigmar.fandom.com/wiki/Namarti_Thralls?oldid=9516"
Community content is available under CC-BY-SA unless otherwise noted.