Alive
Neave Blacktalon is a mysterious figure, who speaks little of her exploits, motivated only by duty and a furious sense of justice. Swift as lightning and as utterly devastating, Neave Blacktalon is a single-minded hunter and slayer of the enemy's most powerful lords. Utilising the aetheirc tailwinds of her Ranger comrades to close the distance to their quarry, Blacktalon strikes before her victim even sees her coming, and hews them apart with a torrent of blows from the Whirlwind Axes.[1]

Neave Blacktalon is a living weapon. Her blinding speed, preternatural senses and terrifying strength of will make her the nemesis of her prey. How long she has stalked Sigmar's enemies is unclear, for like many others, Neave's war began long before Sigmar officially acknowledged her existence. It seems likely that dozens of demagogues, despots and slavelords have felt the bite of the Whirlwind Axes, but of this Neave does not speak; her only concern is her duty to Sigmar, and the death of her next mark.[3a]

In battle, Neave is like a streak of golden light, hurtling into the enemy lines and attacking her victims with relentless ferocity. Effortlessly she scales high walls, vaults over enemy barricades and evades the most devious traps. Those who seek to bar Neave's path soon learn the depths of their mistake as she rips through their ranks in a gory blur. Corpses topple in her wake, heads and limbs lopped, blood jetting in arterial sprays. Her prey follows suit soon enough, for Neave's assault is blisteringly swift and aggressive, and neither parrying blade nor magical barrier can deny her. She is an instrument of Sigmar's will, and she will accept neither defeat nor death until her duty is done.[3a]

Neave fights most commonly alongside the Shadowhammers, the most decorated Vanguard Auxiliary Chamber of the Hammers of Sigmar. Their leader, Lord-Aquilor Danastus, pushes his warriors hard, and prides himself on their being amongst the most lethal of their kind. He has further trained his warriors in the specialist tactics of suppressive fire and close assault, allowing them to rapidly pick apart enemy forces. Fighting alongside Blacktalon, who is both champion and their talisman, the Shadowhammers have achieved victory against vast forces that should have been beyond their capabilities to overcome.[3a] 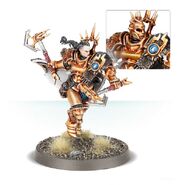