Necromancers are widely regarded as twisted and corrupt individuals who are obsessed with death and the avoidance of it at all costs. To learn such dark magic, these desperate men will seek out a Necromancer or a Vampire to teach them, though this task is not without its own dangers and many aspirants have found themselves dying a grim death at the hands of their would-be tutor. Those that do survive invariably become powerful spell-casters, though their sanity is forever broken by the horrors they have witnessed.[1]

Having been suffused in black magic for decades or even centuries, the corpse of a Necromancer can make a powerful central component in the eldritch war engines of the Realm of Death. 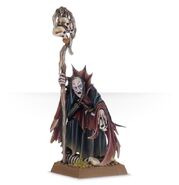 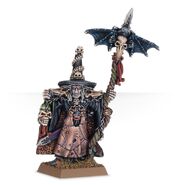