Mortarch of Blood, Queen of Mysteries

Neferata is the Mortarch of Blood and the Queen of Mysteries, a vampiric empress who has cast a long shadow across the reaches of history. Subtle and quicksilver-fast, Neferata is as lethal a political adversary as she is a warrior. Many are the lords and princes she has claimed with her scarlet kiss. Nations fall at her whim and entire civilisations quake before her.[3] She is one of the Deathlords that serve Nagash in the Realm of Shyish.[2]

Whether living or dead, all Nulahmia’s creatures bend to the will of Neferata. The Mortarch of Blood commands a level of adulation from her subjects that borders on worship. It is an adoration she does not return, for to Neferata all other beings are but tools through which to enact her will. She recognises her subjects’ devotion for the powerful weapon it is, and uses it as the cornerstone of Nulahmia’s deathless army. Rank upon rank of clattering skeletons and cold-eyed vampires march at their dread queen’s command, hundreds of thousands of dead men fighting with mindless determination. Rusted blades and grave-stained armour plate glint in the green-tinged halflight, while moaning spirits circle in search of prey. Here is a terrifying host of the living dead, a single dreaded blade for Neferata to wield.[1a]

A lone Skeleton Warrior rarely equals its living foe in terms of brute strength or skill. However, the dead are only too plentiful, and when mustered in hordes they make for a fearsome enemy.[1b]

Even though the blades they wield are ancient and tarnished, and their parched bones are clad in only the most spartan of armour, this skeletal rank and file can be relentless and seemingly unstoppable. They represent a macabre, undying nightmare for any hindered by the corporeal weaknesses shared by those who remain but mere mortals.[1b]

She is armed with the treasures of old Lahmia: Akmet-kar, the Dagger of Jet whose cursed edge screams with the death agonies of innocents and saps the vitality and fighting spirit of its victims, leaving them at Neferata’s mercy; and Aken-seth, the Staff of Pain, whose enchantments add crippling agonies to any sorceries she wields. Neferata rides into battle upon the dread abyssal known as Nagadron, the Adevore, who happily gorges himself upon Neferata’s living enemies as eagerly as it does the souls of the dead.[2a][3]

Neferata is accompanied by a host of spirits that fight with spectral claws and daggers. She can fly, restore her strength by feasting on the souls of her slain enemies, turn her defeated foes into vampires under her thrall, and cast arcane bolts and mystic shield spells. Also, at her arcane command, tendrils of dark mist coil around Neferata’s minions, turning their corporeal forms as insubstantial as smoke.[2a][4] 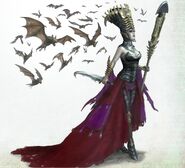 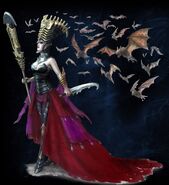 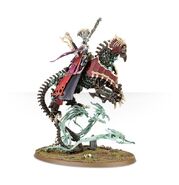