" Anger, rage, aggression – these are born from blood that is hot. But patience, hatred, vengeance – these are cold things. As are we..." 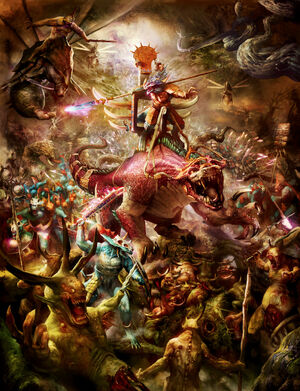 The Saurus Oldbloods are the mighty war leaders of the Seraphon, and as they stride into battle like proud reptilian gods their enemies cower in fear before their cold rage. Swathed in a latticework of ancient scars, an Oldblood is a looming mass of bulging muscle and thickly scaled hide.[1a]

Amid the hissing, scaled ranks of the Saurus stand the Oldbloods, the imposing generals of the Slann’s armies. They are veterans of wars beyond counting, and the battlefields of the Mortal Realms are strewn with the bones of their foes.[1a]

Peerless warriors with an innate understanding of warfare, Oldbloods are master tacticians. Armed with weapons of star-forged celestite, they are amongst the deadliest of the seraphon. In battle the full savagery of their nature is unleashed, tearing and rending with tooth and claw. Through the military might of the Oldbloods is the will of the Slann enacted. For although the Starmasters are powerful wizards, they are ill-suited to the rigors of war.[1a]

Such is the aura of command that clings to an Oldblood that other Seraphon need not guess his intent, for their instincts react to the predatory will of their general. This is especially true of saurus and any Seraphon close to an Oldblood, whose instincts attune to those of their alpha leader, driving them into a state of focused aggression. Thus does the beast’s disciplined fury spread out among his troops, eventually becoming a wave of unbound savagery.[1a]

The favored mount of an Oldblood is a Carnosaur – a mighty beast with crushing jaws and a hide as thick as plate armor. When riding such a monster, an Oldblood is virtually unstoppable. Even the deafening roar of a Carnosaur is enough to cause most enemies to turn tail and flee, for there are few sounds so terrifying as the deep-throated bellow of these saurian beasts as they stomp across the battlefield.[1a]

A Saurus Oldblood takes to the field armed with a powerful Suntooth Maul or a swift Celestite weapon – either a Warblade, War-spear or Greatblade. A seasoned predator, an Oldblood also tears at its foes with its Fearsome Jaws and its Stardrake Shield, which is as deadly in offense as it isindomitable in defense.[1b]

A Saurus Oldblood on Carnosaur flashes of celestial fire leap forth from the Oldblood’s Sunbolt Gauntlet while enemies are impaled on the shimmering blade of its Sunstone Spear. Its Carnosaur mount is a terrifying predator that grips enemies in its powerful Clawed Forelimbs before rending them with its Massive Jaws.[1c]