Start a Wiki
The Stormcast Eternals – supernatural warriors forged in Azyr, each the embodiment of Sigmar’s storm. The heavens roar and the sky crashes, split by searing bolts from above. With an explosion of lightning and a booming thunderclap, the forces of the Stormcast Eternals manifest in reality and plunge into battle. Energised by the magical tempest, they launch their attack, weapons wreathed in celestial energy. Razor-edged blades rise and fall, and heavy hammers swing in an onslaught that batters down all before it. Theirs is the fury of the heavens unleashed.

- Warriors of the Celestial Tempest: the origins of the Stormcast Eternals, great warriors plucked from mortality and reforged into sigmarite-clad heroes sworn to annihilate Chaos ;

- In Sigmar’s Name: the story of the Realmgate Wars, bitter conflicts fought to control the Realmgates, places of great power that allow travel between the Mortal Realms;

- Life and Death Everlasting: Nagash’s plan to dominate the Mortal Realms, and the necroquake which has resurrected trillions of dead souls, causing a new age of incredibly powerful magic;

- The Works of Sigmar Rise High: details of Stormkeeps, the vast, ornamented fortresses that defend Sigmar’s most vital holdings and send a vital message to all that see them – this is the sovereign domain of the God-King;

- A Thousand Storms: descriptions of key battles in the history of the Stormcast Eternals, from the Age of Myth, the Age of Chaosand the Age of Sigmar;

- The Stormhosts : a detailed explanation, with illustrations, of the Stormcast Eternals’ army organisation, featuring command structures, iconography and the different types of Chamber – this introduces the Sacrosanct Chamber, dedicated to matters of the arcane and magical, and the Chamber which oversees the process of reforming each Stormcast Eternal warriors;

- Brethren of Sigmarite: details of some of the countless formations employed by the Stormcast Eternals to wage war, along with background and heraldry for the following Stormhosts: Hammers of Sigmar, Hallowed Knights, Celestial Vindicators, Anvils of the Heldenhammer, Knights Excelsior, Celestial Warbringers, Tempest Lords, and Astral Templars;

- Marks of the Righteous – illustrations of the iconography of the Stormcast Eternals, including colour schemes and heraldries for 27 different Stormhosts;

- Details and background on each character and unit available to a Stormcast Eternals army;

- A showcase of beautifully-painted Citadel miniatures, with an example army and comprehensive painting advice from the experts. This advice covers a huge variety of examples and techniques, showing you how to achieve great weapon effects, gems, glass, fur, plumes, feathers, flesh, scales and battle damage. On top of this, there are step-by-step guides to the colour schemes of the following Stormhosts: Hammers of Sigmar, Hallowed Knights, Celestial Vindicators, Anvils of the Heldenhammer, Knights Excelsior, Celestial Warbringers, and Tempest Lords.

All the rules you need in order to get your Stormcast Eternals army ready for the gaming table are here:

- 50 Warscrolls, covering every miniature available to the Stormcast Eternals faction and including 3 Endless Spell warscrolls – Celestian Vortex, Dais Arcanum and Everblaze Comet – for use with Malign Sorcery;

- 2 Battleplans, including objectives for both sides, deployment map, special rules and victory conditions;

- Pitched Battle Profiles for all units featured in this Battletome, including unit sizes, points values and battlefield roles. 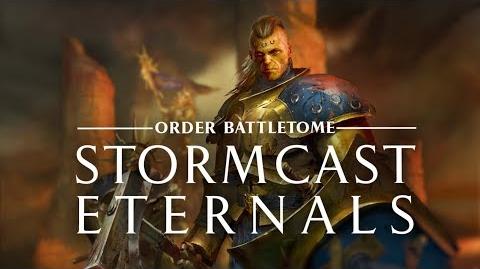 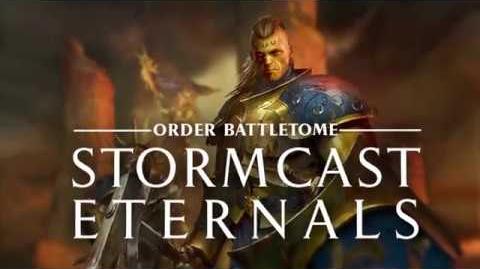 Retrieved from "https://ageofsigmar.fandom.com/wiki/Order_Battletome:_Stormcast_Eternals_(2018)?oldid=10407"
Community content is available under CC-BY-SA unless otherwise noted.