Prosecutors are the warrior-heralds of Sigmar, and the message they bear is one of violence and retribution. Soaring upon blazing wings, they hurtle across the battlefield in a blur of shining sigmarite, hurling down celestial hammers or stormcall javelins before swooping to the attack.[1a]

Gliding out of the storm come the Prosecutors, glowing like avenging angels. Their wings gleam in resplendent rays, like the brilliant light from some nearby star. As if from the tempest itself they summon weapons, hammers or javelins materialising in their outstretched hands. These lightning-wreathed weapons can be hurled down into the foe from range – never unarmed, the Prosecutors simply gesture and another weapon manifests in a blaze of light. A perfectly hurled stormcall javelin channels a thunderbolt, calling the strike onto itself. In combat, the weapons radiate a glowing nimbus of power.[1a]

Prosecutors are the most common of the Angelos retinues, and can be found in all three of the main Strike Chambers, making up a large portion of the Harbinger Chambers in particular. In battle, they use their speed and manoeuvrability to outflank the foe, hurling their deadly weapons and then plunging down to finish them.[1a]

Although they soar through the air, the Prosecutors work alongside those on the ground – wheeling above them in support or darting over them to launch their own lightning attacks. They are often at the tip of the celestial spearstrike, their vengeance inescapable.[1a] 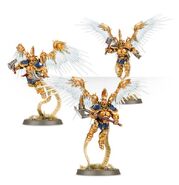