They are the Masters of the Mystic Stormshield, the Guardian Paladins. With their martial skill and the arcane ability of their stormstrike glaives, Protectors lend aid to nearby retinues. Yet their abilities extend beyond defense, for these warriors are elite shock infantry, able to confront any foe.[1a]

As they whirl, the stormstrike glaives of the Protectors weave patterns of celestial energies that shimmer and hang in briefly visible contrails behind the blurred blades. So powerful is this mystic aura that it forms a partial shield, a deflective force capable of blunting arrows and mystic bolts alike. In this way, Protectors earn their namesake, shielding the retinues behind them with their own armoured forms, as well as with the arcane veil woven by their glowing weapons.[1a]

Assembled from the ranks of Paladins, Protector retinues frequently spearhead an assault. The heavy shock infantry can not only clear a path with sweeping blows of their stormstrike glaives, but the storm-shield they weave before them can also offer protection to the formations that follow. It is for this reason that they are often the foremost of the Stormcast Eternals to stride forth from a lightning strike or Realmgate.[1a]

On the battlefield, Protectors frequently form a bodyguard around Lord-Celestants or Lord-Relictors, although it is not unheard of for them to perform the same function for any of the auxiliary command. These formations plunge fearlessly into combat, cleaving a bloody path for others to follow. During the Battle of Durek’s Drift in the highlands of Chamon, the skaven levelled all of their insidious weaponry at the two Hammers of Sigmar chambers that attempted to ascend the steep pathways. With faith in Sigmar, sturdy sigmarite armour, and several retinues of Protectors in the vanguard, the Stormcast Eternals advanced step after step. Straight into the teeth of that hellish firepower they went, enemy shots ricocheting everywhere. When they finally reached the battle line of their mangy foes, the Protectors led the victorious charge. Stormstrike glaives sliced holes into the swarms of ratmen, scything them down with every swing.[1a]

A unit of Protectors has 5 or more members. They are armed with Stormstrike Glaives. 2 in every 5 may instead be armed with a Starsoul Mace.The leader of this unit is the Protector-Prime.[1b] 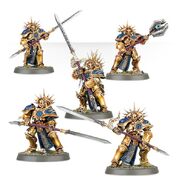 Add a photo to this gallery
Retrieved from "https://ageofsigmar.fandom.com/wiki/Protectors?oldid=8142"
Community content is available under CC-BY-SA unless otherwise noted.