Ulgu is the Realm of Shadows among the Mortal Realms. Here Malerion, the god of shadows, reigns supreme and his will dominates all who dare enter his realm.

Chaos has never managed to fully rule this realm as entire armies have been swallowed by the shadow with only corpses left behind.[1]

Ulgu has thirteen regions all covered and shrouded with illusion and menace. Secrets and riddles are whispered throughout.[1]

The Terrorgheist's ancestors may have come from Ulgu to Shyish, where they were enslaved by Nagash.[2] 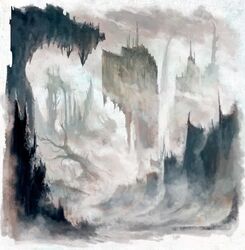 The Realm of Ulgu. 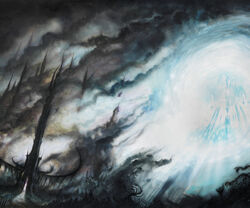 The Realm of Ulgu (left) bordering with the Realm of Hysh (right).
Español
Community content is available under CC-BY-SA unless otherwise noted.
Advertisement