Once a sorcerer-king rich in the knowledge of amethyst magic, Reikenor ran afoul of Nagash. Now, in undeath, the Grimhailer is cursed to serve the Great Necromancer, acting as his chief reaper of souls. There are few sights more ominous than the macabre wraith-wizard atop his winged steed, lit by the eerie light of his corpse candles.[1a]

In Shyish, Reikenor is known by many names - the Grimhailer, the Reaper-wraith and the Storm Rider among them. Sorcerer, master of terror, reaper of souls, fell lieutenant of Nagash - Reikenor is all these things and more.[1a]

Much of Reikenor's origins are mysterious, lost to time, but what is known is that he was once a learned sorcerer-king who sought to overcome death. Through the magic of Hysh - harnessing the very light of reason - Reikenor worked towards preventing all mortality. His quest for knowledge on the subject was all-consuming, and he attracted many acolytes and followers. Eventually Reikenor's attempts to unbind the workings of death drew the ire of Nagash himself.[1a]

In the afterlife the Grimhailer still hunts, but now he does so in the name of Nagash. His quarry is no longer eldritch secrets of mortality - instead he seeks those who transgress against his master. Through his arcane powers Reikenor can sense those that withhold souls from Nagash, tamper with his necromantic rituals, desecrate his monuments or commit any other sacrilegious act. Those who are not in service to Nagash but pursue necromantic knowledge are especially targeted.[1a]

Upon detecting blasphemies, Reikenor swoops down upon his winged steed shrieking the syllables of powerful hexes whilst dealing sweeping blows with his scythe, Fellreaper. However, even those Reikenor slays in battle he is not finished with - for such unfortunates he has further torments in store.[1a]

Through his incantations, Reikenor can summon a wraithstorm - a cyclone of amethyst magic that stirs those souls recently separated from their bodies. Inspired by Nagash's desire to see grim justice meted out upon those that offer him insult or rebel against his wishes, Reikenor's spell incites the departed spirits to savagely attack their former comrades. The spell creates a spectral hurricane in which wraith-like phantoms hack and pull down the living. Thus is a dark vengeance delivered to those that would thwart Nagash.[1a]

To aid Reikenor in his appointed task, Nagash has bound to him Kyllaron, a fierce winged Nightmare. Mounted on the undead steed's head armour are a grim assortment of corpse candles. They are a unique mix of tallow rendered from Reikenor's former apprentices along with a grave-sand mix. Indeed, after his soul was claimed by Nagash, it was the Grimhailer's own disciples that were his first target. They too were blasphemers and Nagash deemed their fate fitting. By snuffing out the flame of a corpse candle, Reikenor can end the life of a nearby mortal or siphon off a portion of his own essence - either way, by doing so he creates a surge of arcane force to empower his enchantments. The Grimhailer is now condemned to kill forever, and that he must extinguish light and create darkness to do so is a cruel twist that Nagash holds as one of his most just punishments.[1a]

Prior to the Shyish necroquake, Reikenor often hunted the Mortal Realms on his own. Following the rise of Lady Olynder, the wraith-wizard has joined the Nighthaunts, leading processions on her behalf or following missions set by the Mortarch of Grief. So is his power greater than ever before.[1a] 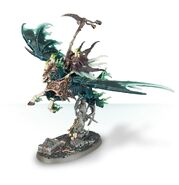 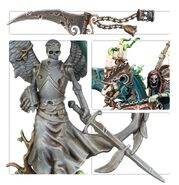 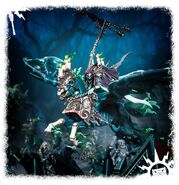