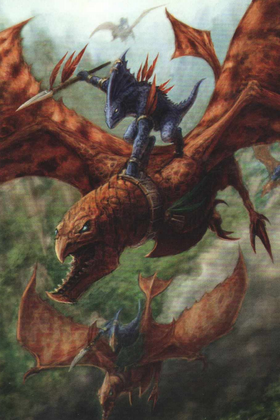 Ripperdactyl Riders wield their spears with deadly skill, but it is their mounts that enemies quickly learn to fear. The Ripperdactyls themselves are vicious in the extreme – feral winged beasts possessed of voracious appetites, which tear their prey to shreds with razor-sharp beaks and talons.[1a]

Ripperdactyls descend upon the battlefield in a flock of skyborne death. In their instinctive urge to feed, they snatch up enemy warriors, piercing their flesh with wickedly sharp beaks and ripping out their steaming innards in bloody strands.[1a]

Perched upon their backs, brave skinks thrust moonstone spears as their speeding mounts swoop over the heads of the foe, each well-placed stab punching a hapless victim from its feet in a spray of gore. However, it is the Ripperdactyls that inflict the most damage on the enemy – the ragged and bloody evidence of their predatory fury is sent tumbling to the ground amid a storm of beating wings and flashing claws.[1a]

Whereas the Terradon Riders usually rely upon their speed to carry them past the foe while they loose their arcane payloads, Ripperdactyl Riders plunge directly into the heart of combat. Here, amid the screams of the dying and the stench of freshly spilled blood, are the beasts in their element, snapping and clawing at anything within reach. While the enemy quail in the face of the Ripperdactyls’ frenzy, the skink riders thrust their spears, piercing hearts and throats.[1a]

Such is the savage ferocity of the Ripperdactyls that they can quickly become difficult to direct in battle. To focus the beasts’ wrath, the Slann will sometimes conjure blot toads – noisome amphibians whose pungent scent is a powerful lure to the Ripperdactyls.[1a]

At the command of the slann the diminutive creatures crawl forth among the ranks of the enemy, often moving unnoticed between armored boots and locked shields. The seraphon’s foes seldom realize that the toads’ presence heralds a storm of savagery that will spell their doom.[1a]

A unit of Ripperdactyl Riders is armed with Moonstone War-spears and carry Star-bucklers, while their mounts attack with Slashing Claws and Vicious Beaks.[1b] 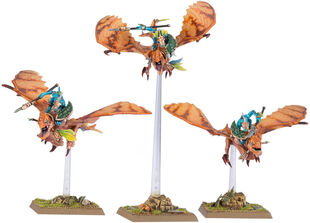 Retrieved from "https://ageofsigmar.fandom.com/wiki/Ripperdactyl_Riders?oldid=11673"
Community content is available under CC-BY-SA unless otherwise noted.