Age of Sigmar Wiki
Register
Don't have an account?
Sign In
Advertisement
in: Greenskinz, Ironjawz Military, Ironjawz,
and 4 more 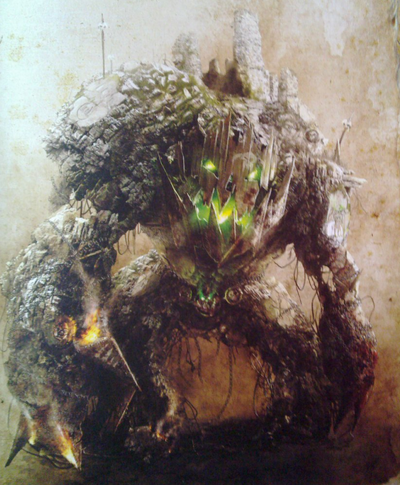 The Rogue Idols are mighty idols of Gorkamorka animated by the Waaagh! energy. Greenskins believe these enormous amalgamations of chunks of rock and densely packed soil are a sign from Gorkamorka. They have eerily lifelike hollow eyes, which can be covered with a mask, immense bunched fists and their surface is covered in glyphs and carven symbols declaring praise to Gorkamorka.

Shamans built these out of rubble and battlefield debris of the Orruks recent conquests, mortared with Squiggoth dung or strange stone quarried in the deep places of the realm and are daubed with crude sigils. Some even incorporate volatile shards of Realmstone or Shadeglass into their forms. They are daubed with crude sigils and roaring bonfires are lit around them. The shamans then dance around the silent idols while the tribe bellow their war chants, continuing the rituals for hours and days until the idols soak enough Waaagh! energy and the innate magic of the Greenskin is mixed with those of the Mortal Realms. When the ritual is complete their eyes glow with green fire as it stirs to life and stomps off in search of biggest battles, with the greenskins following in it's wake.

These monstrous effigies wades into battle by the will of Gorkamorka, one thunderous charge after another, crushing their enemies into a bloody pulp using it's Boulder Fists and Stompin' Feet. As a pile of rock and detritus in motion it has few weaknesses and does not feel pain. As a spirit of the Waaagh! this creature is driven onwards by the will of Gorkamorka and can never retreat. As its lifeblood is Waaagh! energies it helps nearby Orruk or Grot wizards in casting their spells, and enhances the bravery of friendly Orruks and Grots.

This idol doesn't care if the rubble and bits of their victims fall off their form or if it hits their foe or friend alike. Once slain this effigy of the green god falls apart in a rain of rubble, usually crushing the foe that has bested it and seeing it destroyed decreases bravery for all friendly greenskin in that battlefield. Once the battle is done they tirelessly wander off in search of fresh fighting, usually the biggest battles followed by the tribes of greenskins it found.

More than a hundred Rogue Idols have already joined the vanguard of Gordrakk's Great Waaagh!, a sign that the mighty Megaboss is blessed by Gorkamorka. 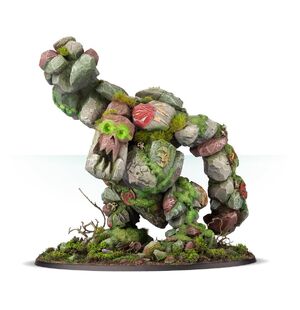