There is one chamber alone that governs matters of magic and arcane strength. Its warriors wield storm energy, whether through their weapons or in its purest form. More than that, they keep vigil over the process of reforging itself – without them, the Stormhosts have no eternal future at all. This is the Sacrosanct Chamber.

The Sacrosanct Chambers of the Stormcast Eternals are more attuned to the magic of the storm than any other. It is they who wield the raw power of the Heavens in Sigmar’s name, hurling thunderbolts, summoning meteors and wielding weapons so redolent with aetheric power they can send a spirit or daemon screaming into nothingness. Supported by highly destructive artillery weapons imbued with the power of the storm, the warrior-mystics of the Sacrosanct Chambers are capable of obliterating almost any foe that crosses their path with their potent magic.The Sacrosanct Chambers may not only hold the key to defeating Sigmar’s direst foes, but to the salvation of those he sends to fight in his name. One of the most critical stages of a Stormcast’s reforging is his transformation upon the Anvil of the Apotheosis. In a great pillared hall, upon the ensorcelled altar at its heart, the energy that forms him is wrought with the stuff of the stars themselves. It is focused into a new form through the magic of the Six Smiths, legendary beings descended from the duardin god Grungni the Maker. Throughout the process, the essence of the Stormcast is controlled and shepherded by the skills of the tempest mages of the Sacrosanct Chambers. These warrior sages are critical to the reforging process, for they are the guardians of souls.[1a]

To be remade upon the Anvil of the Apotheosis is a traumatic experience fraught with danger. It can lead to the demise of the soul, or perhaps worse still, can result in the Stormcast’s spirit tearing free and becoming a lightning gheist. Destructive in its confusion and pain, the crackling blur of animus can cause carnage across the Sigmarabulum and beyond.[1a]

It is the duty of the Sacrosanct Chambers to recover – or neutralise through magic – such errant souls. It is a testament to their skill that many of these souls make it back to the Anvil to complete the reforging process, though not all are salvageable. The Sacrosanct Chambers are rightfully feared as well as held in awe, for should Sigmar deemit necessary, they would kil a rogue Stormcast Eternal in a heartbeat.[1b]

Much like the other echelons of Sigmar’s gleaming hosts, the Sacrosanct Chambers have many different conclaves and retinues within their order. All of their members were once wizards, sorcerers or beings of magical talent, for they are recruited exclusively from souls that had some aptitude for spellcasting in their former lives. Some are from exotic kingdoms indeed, and have such skill with the arcane they rival even the aelven elders of Azyr. The Lord-Arcanum of the Grave Brethren – the foremost Anvils of the Heldenhammer Sacrosanct Chamber – hails from another era entirely. Though his history is shrouded, his ability to wield the transmutative magic of Chamon is such that he turned the gold stores of the rebel city Agnostai to granite with a wave of his hand.[1b]

The Lord-Arcanums that answer to each Stormhost’s Lord-Commander are powerful mages in their own right, as are the Knights-Incantor that act as their lieutenants in the field. The killing energies of the storm are theirs to command; they can loose the fury of the tempest in a dozen different ways, summoning hurricanes of devastation and gales of aetheric force.[1b]

The rank-and-file warriors that fight under them do not manifest magic outwardly, instead channelling their mystical power into their own bodies and sigmarite weaponry. This makes them extremely dangerous warriors, for their innate potency is increased all the more by the lightning of Azyr crackling around their hammers, staves and shields. Those they smite are not only cut apart or broken by the blow, but also scorched and blasted by celestial energy.[1b]

As the Sacrosanct Chambers’ warriors enter the war for reality that has been long raging across the realms, they bring the ferocity of the storm to all of Sigmar’s foes. The God-King has long marshalled their strength in secret, but now is the time for them to come forth. As experts in the manipulation of spirit energy, they make for the perfect weapon against the ethereal hosts of Shyish, whose numbers are ever on the rise.[1b]

Nagash is seen as a betrayer in Sigmar’s court, and the God-King anticipated that the Great Necromancer would expand his power via magical means sooner rather than later. When the Shyish necroquake broke across the realms, the doors of the Sacrosanct Chambers were flung wide in response, and many of their warriors cast into the realms to hold back the tide of wraiths that threatened to consume Sigmar’s new cities.[1b]

For the Sacrosanct Chamber’s aether-mages, another duty now lies beneath their traditional role of the guardians of the Anvil. These warrior mages have been despatched not only to protect the strongholds and cities of the Free Peoples, but to explore those locations where the stuff of eternity and the cycle of life itself has been shaped or manipulated. Their retinues fight their way through layers of antiquity to find fragments of the truth, striking out for some of the most lethal and arcane sites in all the Mortal Realms. They have been seen in the amethyst sepulchres of Shyish, the lost city of Shadespire, those of the Jade Kingdoms most synonymous with rebirth, and a hundred other esoteric locations besides.[1c]

Though not even their fellow Stormcasts know it, these crusaders have a holy task given to them by Sigmar himself. They search for the key to reversing – or at least allaying– the flaw in the immortality of the Stormcast Eternals. They are the greatest hope for the warriors of the Heavens, for in High Azyr the side-effects of the reforging are becoming steadily more pronounced. If Sigmar’s crusade is to stay true to the values that make it righteous, his most eldritch and arcane warriors absolutely cannot fail.[1c] 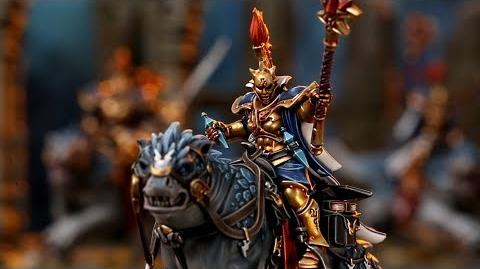