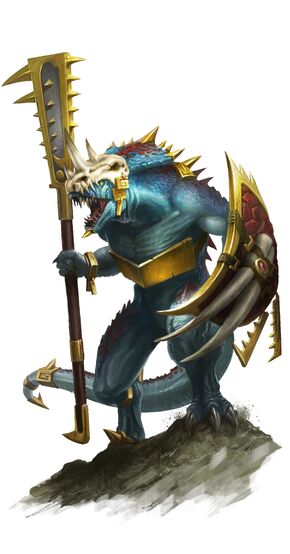 Bone-helmed guardians of the Slann, the Saurus Guard are chosen from the largest and strongest of the Saurus. They are the scaled shield that protects the Seraphon’s ancient masters, and the snapping jaws that crush any who would dare raise weapons against them.[1a]

Utterly loyal to their master, the Saurus Guard are the personal custodians of the Slann. Wearing thick skull-helms and wielding heavy celestite polearms, they close ranks around their lord in battle, forming a living wall of armored hides and snapping fangs.[1a]

Foes bold or mad enough to try and land a blow upon a Slann must first face the wrath of the Saurus Guard, and the long lives of the Starmasters are testament to the fact that few succeed. Even other Seraphon approach the Slann with care, as the Saurus Guard are remorseless in their protection of the ancient wizards.[1a]

The Saurus Guard are unique among the Seraphon in that their celestial forms are inextricably linked to a particular Slann, ensuring that they may only be summoned by a single Starmaster for as long as he endures. Often, during the long periods in which a Slann remains deep in contemplation, the Saurus Guard deal with his more mundane enemies, allowing their master to continue his meditations undisturbed.[1a]

For ages untold there have been many legends told of the Saurus Guard and their deeds, such as the Sundering of the Vale of Statues. During the battle the Slann Lumqu was spared only when his Saurus Guard formed a dome of shields overhead, their locked arms saving him from the descending foot of the Brazen Gargant.[1a]

The Obsidian War tells a similar tale. As Yanquala dueled the Twin-souled Sorcerer of Nizt, the Slann’s bodyguard defended his inert form. Five hundred seasons passed on the Splintered Plains as they fought off attacks, and generations of tribesmen were born and killed during that battle. When at last Yanquala emerged from his trance triumphant, he beheld a plain of bones around his guardians.[1a] 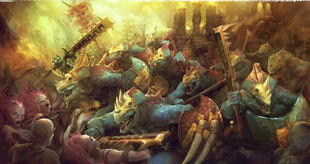 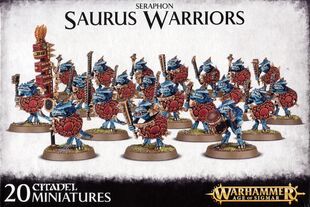