Saurus Knights ride vicious cold ones into battle – dread reptilian creatures that are almost immune to pain. The charge of a Saurus Knight cohort is terrible to behold, for both rider and mount are savage predators, each driven to ever greater acts of violence by the bestial ferocity of the other.[1a]

As the spear tip of the constellations, Saurus Knights often lead the vanguard of Seraphon assaults within the Mortal Realms. Charging across the battlefield following the scent of their prey, both mount and warrior make a gore-soaked ruin of any who dare stand in their way, until their scaly hides are slick with the blood of their victims.[1a]

Swift and devastating in combat, Saurus Knights are summoned by the Slann as shock troops, smashing through wavering shield walls before circling round to tear at the foe’s flanks, or running enemy leaders to ground and ripping them limb from limb.[1a]

Cold ones are beasts akin to the Saurus themselves, though seemingly less evolved and more animalistic. Foul-tempered and vicious, they embody the brute strength of the Seraphon as well as their predatory nature. However, without the wit of the Skinks or the discipline of the Saurus, cold ones summoned by a Slann would swiftly revert to their baser instincts. Thus it falls to the Saurus to control the beasts and ride them to war, guiding them in the press of combat.[1a]

As creatures of Azyr, cold ones have an instinctual hatred for Chaos, and they eagerly rip apart daemonic flesh with their wickedly curved dewclaws and huge fangs. Even though the cold ones have no need for sustenance, they will still tear apart the bodies of their foes, chewing off chunks of meat whilst splattering those nearby with steaming gore and ichor.[1a]

For all the ferocity of the cold ones, however, it is their riders that the enemies of the Seraphon fear the most. Thundering into battle, the power of Azyr ignites their lances with celestial flame, and in the face of these bone-shattering charges enemy lines are left as nothing more than tangled masses of burning corpses.[1a] 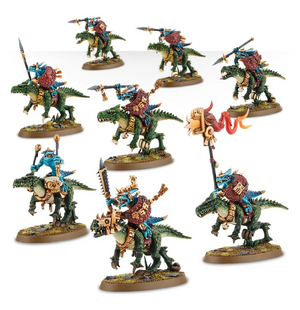 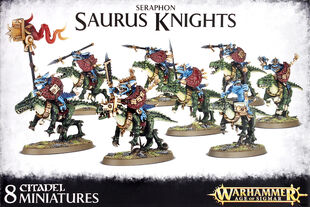