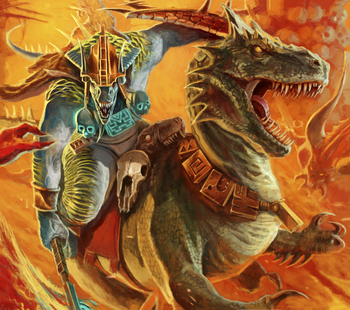 Saurus Scar-Veterans are great champions of the Seraphon, found leading earth-shattering charges into the heart of the foe. Survivors of innumerable conflicts, their battle-worn hides are a testament to their prowess, and their ferocity is an inspiration to the Seraphon that follow them.[1a]

In battle the Scar-Veterans are always where the fighting is thickest, their razor-sharp teeth rending the flesh of their enemies even as they smash open skulls and break bones with heavy blows from their weapons.[1a]

Despite their ferocity, Scar-Veterans are not mindless killers or reckless berserkers. Their strength is tempered by the discipline and order that permeates all Seraphon. Indeed, a Scar-Veteran may eventually become an Oldblood as their battle-lust cools into a focused rage.[1a]

As befits their blood-hungry temperament, Scar-Veterans ride mighty beasts of war to battle. On the backs of cold ones they are swift, sure-footed and deadly, but it is when riding a Carnosaur that their ferocity is truly realized. With an ear-spitting roar, the great beasts inspire the Saurus around them to even greater acts of savagery.[1a]

Whether mounted on the back of a monstrous Carnosaur or leading a spearhead of Saurus Knights, there is no aspect of battle in which a Scar-Veteran does not excel.[1a]

Scar-Veterans carry Celestite War-picks and have fearsome jaws. They also carry an ancient device to channel magical energy. They often they carry Battle Standards. Scar-Veterans can sometimes be seen riding Carnosaurs. In this instance they can be armed with a variety of weapons, including a Celestite Warblade, Celestite War-spear or Celestite Greatblade, and also a Stardrake Shield.[1b][1c]