The rank-and-file of the Sacrosanct Chamber are Sequitors. Like Liberators, these warriors are the line infantry of their respective Chamber but specialise in fighting magical foes, like Daemons and Nighthaunt. They have a few magic powers of their own, too – each was a mystic, priest or mage in their former life and now possesses the power to channel energy to their shields or weapons where needed.[2]

The line infantry of a Sacrosanct Chamber is comprised of its Sequitors, stern warriors who channel the tempest through the magical weaponry bequeathed to them by Sigmar. To be struck by such a warrior is to feel the energy of the storm discharging with thunderclap force.[3a]

Sequitors do not consider themselves to be true mages, being at the first stage of their arcane mastery, but to mortal eyes they are supernatural to a terrifying degree. Towering over the people they are sent to defend, each Sequitor has the strength of three stout men. They wear armour of burning sigmarite, thunder rumbles with their war cries, and their weapons glow blue with the power of High Azyr. When they fight as one, a corona of energy crackles around them, building in intensity to form crowns of corposant that mark the Sequitors as the living weapons of Sigmar.[3a]

Key to a Sequitor’s power is their weaponry. Most wield a heavy and angular stormsmite maul in one hand, and a broad soulshield – somewhat like that of a Liberator – in the other. Yet there the similarities to the rank-and-file of the Warrior Chambers end. A Sequitor is able to channel magic into the armaments they carry to war – imbuing either their weapon or shield with aetheric power, then moving this enchantment between them to weave fluidly between stalwart defence and blistering attack.[3a]

When a Sequitor’s tools of war are energised with the innate magic of the wielder, the might of the storm flows through them, causing them to glow blue with arcane force. A soulshield so empowered can turn aside even a blow from a daemon-possessed blade or a Hexwraith’s soul-cutting scythe. When a stormsmite maul is infused with the energy flowing from the Sequitor’s soul, it discharges the force of each strike with terrible effect, stunning the adversary’s mind into thunderstruck inactivity as it mangles and scorches their flesh.[3a]

Still more formidable are the two-handed maces used by the strongest of the Sequitors’ number. These stormsmite greatmaces have each been laid against the head of Ghal Maraz, the Great Shatterer itself, for a night and a day – and over that time they have inherited some of its godly power. The thunderous impact of such a weapon can tear through baroque plate or chitinous mutation as if it were paper-thin. When such a weapon lands a solid blow upon unprotected flesh, it will blast its target to nothing more than a scattering of cinders.[3a]

The true purpose of these weapons is not to engage mortal foes, but to slay the otherworldly. Should a stormsmite greatmace strike a creature not of the waking world, such as a gheist or daemon, it can blast apart that entity forever, banishing it from the Mortal Realms.[3a] 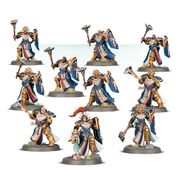 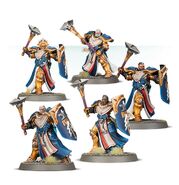 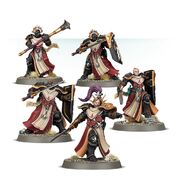 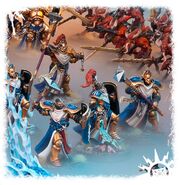 A Sequitors in battle. 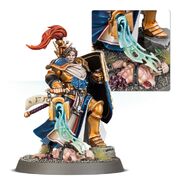 Pre-release image of the Sequitors miniatures.[2] 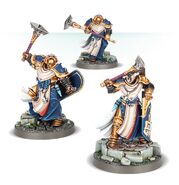 Sequitors miniatures from the Easy to Build Sequitors plastic kit.[6] 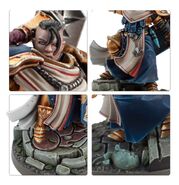 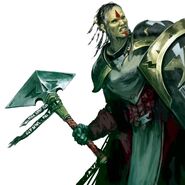