Age of Sigmar Wiki
Register
Don't have an account?
Sign In
Advertisement
in: Daughters of Khaine Military

Merciless masters of the lash, the Sisters of Slaughter leap into the fray and do not cease until all their foes lie dead. Sometimes even that is not enough to stop these vicious killers, for to them mutilation and bloodshed are acts of purest devotion to their cruel deity.

To the Sisters of Slaughter, combat is everything. Their entire lives are dedicated to fighting вЂ“ melee is worship, and each drop of blood spilt it is an offering to Khaine. They fight in an exaggerated style, spinning, leaping and posing dramatically as they use their whips and blades to trace ancient runes in enemy flesh.

The Sisters of Slaughter are a sub-cult considered extremist even by other Khainites. Whether absorbed by revenge or overcome with the murderous spirit of Khaine, the warriors take the vow of druharГє, and don masks of living metal. Once, these were worn solely for the Khielt-gadh, a ritual combat that recreated the mythic battles of Khaine against the Chaos powers. In an excruciating rite using boiling blood and spells of bonding, those who would join the sisterhood permanently graft the helms onto their heads, the metal leering ever more cruelly as it scents blood. Only the most committed choose the face of Khaine over beauty. The screaming lasts for hours. Yet the trial is not complete until they have fought a series of ceremonial duels against established members. Those that do not succumb to blood loss become Sisters of Slaughter вЂ“ gladiatrixes insanely dedicated to fighting in the name of Khaine.

Barbed whips вЂ“ kruip-lash, in their own tongue вЂ“ are the weapon of choice for the Sisters of Slaughter, and each practises her weaponcraft to levels of skill and precision only an aelf could achieve. With a simple flick of her wrist, a Sister can crack her kruip-lash so that it shears a gloomfly in half вЂ“ an amazing feat, for the thumbnail-sized insects blend in with the cloying mists in which they are found. When the barbed whips are used in battle, the effect is far more devastating вЂ“ the serpentine coils snap out to sever limbs, lacerate eyes or puncture armour to flay the flesh beneath. Some Sisters battle with a short stabbing blade in addition to their lash, while others prefer a bladed buckler that can turn enemy strikes and deliver a lethal counter-blow of its own. 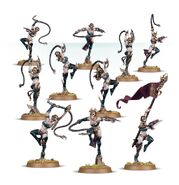