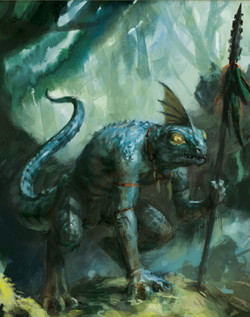 Skinks bombard their foes from all directions with crackling volleys of celestial energy and meteor-like projectiles. Even as their opponents try to bring them to battle, the diminutive Seraphon slip away into the shadows, ready to appear without warning once more and bring death to their enemies.

Nimble and clever, skinks are the skirmishers of the Seraphon armies. In battle they form swarms of warriors that move quickly around the enemy’s flanks, ducking in and out of terrain whilst peppering the foe with meteoric javelins and arcane darts. In greater numbers they grow deadlier still, the light of their weapons burning brighter as they are fueled by the collective celestial essence of the skinks.

Standing but chest-high to most men, skinks are nonetheless dangerous fighters, and are easily a match for their mortal counterparts. Chirping and clicking in their alien language, these intelligent creatures excel at coordinated attacks – by working in perfect unison with one another, their cohorts strike at the enemy’s weak spots or overwhelm unprepared targets.

Skinks temper the Saurus’ battle-fury with a hunter’s patience, for where their larger cousins might try and smash their way through an obstacle or foe the skinks will often seek a more cunning path to victory. In battle, this makes skinks tricky foes, as they seek out hidden pitfalls and aspects of the battlefield they can turn to their advantage, striking at their enemies from an unexpected quarter.

Some skinks, such as the Chameleon Skinks, possess curious abilities that allow them to fulfil specialized roles in battle. Superlative hunters and assassins, these Seraphon mimic their surroundings as they stalk their prey. Even keen-eyed enemies see only slowly moving shadows as they search for their mysterious attackers. Too late they realize they are being watched, as dozens of glinting eyes appear in the darkness and the air is filled with the whispers of celestite blowpipes.

Chameleon Skinks exist within the shadows where the burning light of Azyr does not always reach. Here, they relentlessly hunt the followers of the Dark Gods as invisible instruments of the Slann’s will. The enchanted star-venom these skinks use to coat their darts is particularly lethal to the Daemons of Chaos, whose unnatural flesh bursts into celestial flames upon contact with the strange substance.