" The stars change. The skies burn. The war remains the same." 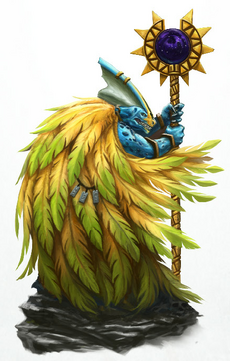 Alone amongst the Seraphon, the Skink Priests, Starpriests, Starseers and Oracles can harness the magical might of Azyr. They act as extensions of their master’s will, directing the warriors and beasts of the Seraphon host so that the Starmaster might be free from terrestrial distractions.[1a]

Skink Priests are gifted with intellects far beyond those of most mortals. By performing Azyrite star-rituals, these priests can subtly alter the outcome of a battle, just as the Slann themselves can manipulate the fate of civilizations.[1a]

Skink Starpriests are more akin to the wizards of other races, for they act as sorcerous conduits for the Slann. Theirs is the power to call upon the destructive energies of Azyr, burning away foes in beams of searing light.[1a]

Greatest among the skink spellcasters, and most capable of all the Slann’s servants in matters arcane, are the Starseers. No Seraphon are as attuned to their ancient masters as the Starseers, for they are able to understand a measure of the plan that the Slann follow, and the great war they wage against the Dark Gods. Starseers are often more aware of the present than the Slann, as the skinks’ minds are unclouded by the fragmented memories of aeons. Thus do the Starseers act as guides, finding patterns in the missing pieces of the Seraphon’s past and unveiling forgotten truths.[1a]

Especially potent Starseers are able to travel far from their master’s side whilst retaining a measure of his power. Seraphon armies may even be led by such beings, and they can exert great influence within the Mortal Realms. Starseers are also adept at shaping celestite and star-stone, the materials out of which many Seraphon weapons are created. Bending these celestial minerals to their will, they can craft palanquins to carry them into battle. These floating war thrones are covered in celestial symbols, enhancing the Starseers’ already powerful astromagical abilities.[1a]

Skink Oracles ride to battle upon huge blind beasts known as Troglodons. These creatures scent their prey with venom-flecked tongues, while their riders wield divining rods that unravel the magic of the foe. Oracles are gifted with a measure of the Slann’s foresight, allowing them to see magic as others might perceive shadows on the sky or feel the breeze upon their face. Thus blessed, they can protect the Seraphon force from hostile sorcery.[1a]

A Skink Starseer is a single unit carrying an Astromancer’s Staff and seated upon a Palanquin of Constellations – a floating throne of carved stone that incorporates augurs and seeing-stones for discerning the future from the movement of the stars. A Skink Starpriest wields a Star-stone Dagger and carries a mystical Serpent Staff. A Skink Priest wields a Star-stone Staff. Each has its own methods of performing celestial rites; some garb for war in a colorful Cloak of Feathers and cap their staff with an Azyrite gem that looses searing Starbolts, while others prefer to carry a variety of Priestly Trappings, from small glyph-stones to the bleached skulls of their foes.[1b][1c][1d] 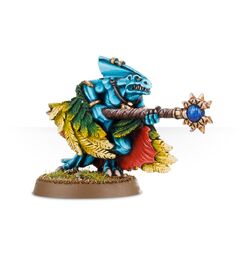 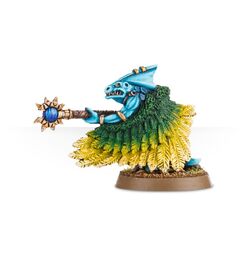 Retrieved from "https://ageofsigmar.fandom.com/wiki/Skink_Priests?oldid=11666"
Community content is available under CC-BY-SA unless otherwise noted.