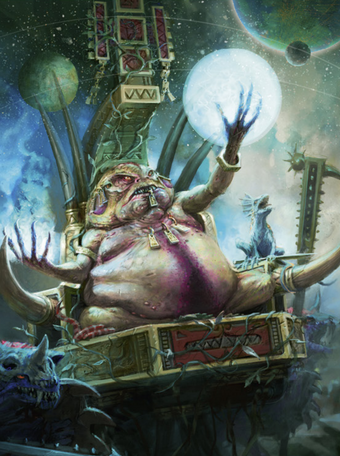 The Slann Starmasters are the leaders of the Seraphon. They are toad-like creatures with immense magical powers. They are exclusively found sitting on magical palanquins from where they can survey the battlefield and bring their magical powers to bear most effectively. In order to obliterate their foes, the Starmasters manipulate the very heavens. Through their arcane might and vast intellects are the Seraphon summoned to the Mortal Realms to crush the servants of Chaos.[1b]

Few creatures have mastered the secrets of magic like the Slann. Long aeons spent traversing the stars have saturated their minds with the power of Azyr. As they glide into battle atop their graven thrones, sorcerous energies arc around their fingertips with the promise of fearsome spells waiting to be unleashed. Mortal mages are as mere children before the Slann’s enchantments – with a casual gesture the ground erupts in fire, blazing light scours the battlefield of all taint and roaring comets hurtle down from the sky.[1b]

The Slann are survivors of a bygone age who bore witness to the birth of the Mortal Realms. To their labyrinthine minds the past, present and future blur together, though in rare moments of lucidity they bend all their sorcerous might towards the downfall of Chaos. However, the slann still rely upon the creatures of Azyr to fight their wars and further their great plans, for despite their immense magical power they almost always stand alone. Truly these beings are motes of pure celestial light among an infinite sea of darkness.[1b]

Thus many of a Slann’s spells will focus upon strengthening his warriors, invigorating their forms with Azyrite magic or transporting them across the battlefield in the blink of an eye. A seraphon army with a Slann at its heart is also never truly defeated, the ancient wizard able to summon fresh warriors to his side at a thought. The stars overhead also play a vital role in the slann’s plans, and as a glittering constellation rises over the horizon the mighty seer can call upon its magic to change the course of battle.[1b]

The Price of Eternity

Time and their long journey across the void have taken their toll upon the Slann. Many have been slain in the relentless war with the Dark Gods, while others have simply vanished, lost to the slow march of ages and the endless battles that wrack the Mortal Realms. However, some live on despite the death of their bodies as spirits trapped within desiccated mortal forms – creatures of celestial magic more than flesh and blood. Greatest among these is Lord Kroak, believed by the Slann to be the oldest of their kind. Filled with the light of Azyr, Kroak is a vessel of immense arcane power, and though his body may be withered and useless, battlefields still tremble before his mighty incantations.[1a]

Slann are able to use their magical powers, including surveying the constellations, allowing other units to fly and making it easier to kill the forces of Chaos. They have also been known to project their magical powers through other wizards in the Seraphon force. Their palanquins are known to be able to project immolating lightning at enemies threatening the Slann.[1d]

Retrieved from "https://ageofsigmar.fandom.com/wiki/Slann_Starmasters?oldid=11608"
Community content is available under CC-BY-SA unless otherwise noted.