Swollen with the power of Chaos, the Slaughterpriest looms over his Bloodbound brethren. Not only is this terrifying figure a mighty warrior in his own right, he is a favoured champion of Khorne who is able to call forth dark miracles by drinking the heartsblood of the foe.[1b]

Slaughterpriests are the demagogues of Khorne’s wrathful will, dark prophets who receive gory visions of violence and death from their god. With a single, bellowed prayer these hulking priests can boil the blood in men’s veins, or whip their allies into a savage battle-frenzy. Most terrible of all is the Slaughterpriest’s ability to compel the unwilling to rush heedlessly into combat; his booming chant fills even the foe with a mindless rage, their fever building until once-stoic defenders abandon their barricades and battlements to dash, reckless and doomed, into the fury of the fray.[1b]

All of these powers stem from the Slaughterpriest’s ability to channel the wrathful might of Khorne. This he gains through drinking the blood of truly worthy foes, mixed with potent tinctures of warpstone dust and daemon gore. After a particularly brutal battle, a Slaughterpriest will drink deeply of this foul draught, and it is said that every drop that flows down his gullet swells the swirling moat that surrounds Khorne’s great Brass Citadel. Whatever the truth of this, the mixture’s effects upon the Slaughterpriest are immediate and horrifically pronounced.[1b]

As a side effect of drinking their hideous concoction, Slaughterpriests swell with grotesque slabs of muscle. Their bones harden and burst through their flesh. Their limbs stretch and thicken, until they loom over their flock, blessed with the strength of Khorne. Such are the priests of the Blood God, mighty warriors whose holy powers are bound to their prowess in battle. Those who make unworthy offerings to Khorne do not survive this transformation. Either they deform into monstrous Spawn, or else choke and drown as the vile brew they have imbibed boils them from the inside out.[1b]

A Slaughterpriest is armed with a Bloodbathed Axe, a ritual cleaver the height of a lesser man.[15] 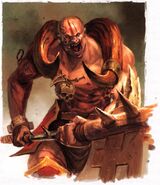 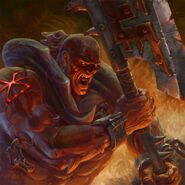 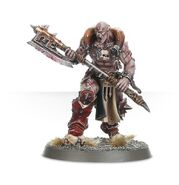 Retrieved from "https://ageofsigmar.fandom.com/wiki/Slaughterpriests?oldid=8544"
Community content is available under CC-BY-SA unless otherwise noted.