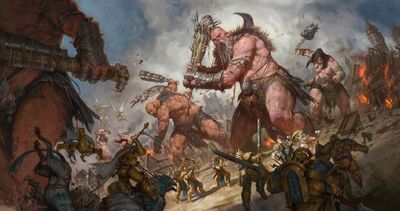 The Sons of Behemat are Gargants that found their purpose and became more unified after the death of Behemat. They are growing so strong and large that some speculate that one may grow so large as to become a new World Titan.

The many types of Gargants found throughout the Mortal Realms are rightfully feared for their sheer gigantic size and colossal strength. Having no natural predators, the Gargants hunt, sleep, eat people whole, drink captured ale, sleep again, belch, break wind at one another, and smash settlements because they can.

The Sons of Behemat are no longer simple-minded behemoths easily outwitted by the smaller races, however. Following the death of Behemat, they formed near-unstoppable war parties that crush anything opposing them.

Gargant history is passed down as an oral history amongst the tribes' matriarchs. The goal of such stories is to learn ambition and be incited to acts of truly mythic violence, not to learn some type of wisdom or caution.

Following are an assemblage of common oral histories that form the historical perspective of the Sons of Behemat:

Ymnog the First Titan had so great a temper that he once used his club to shatter reality itself into land, sea and sky.

Ymnog sated himself by eating the heavens' comets and washed them down with the First Ocean. He then laid down creating the chasms of the realms with his own weight. Sleeping with his mouth agape, his drool created the rivers and his snore the first thunder.

As Ymnog slept, the stones in his belly grew into Behemat and his Gargant kin. Wanting to escape, Behemat brewed, in his father's guts, a potent moonshine so foul it made Ymnog retch up the Gargants into his mouth. Even with salvation within their grasp, two of the Gargants, Gorg and Ama-Gorag, began fighting one another over a jar of vomit upon Ymnog's tongue in order to quench their thirst. Accordingly, they were both swallowed back down forever.

Only Behemat escaped alive by hammering the fangs of Ymnog, whose splinters became the first mountains.

Under the influence of Tzeentch and Khorne, Gorkamorka began to resent the fact that Behemat, his champion, roamed free whilst he hunted at the behest of Sigmar.

From that point on, Gorkamorka issued Behemat a challenge he could not refuse each time they met. He was to replicate the twin-headed god's feats or die in the attempt.

The first task was to destroy a city by causing a great flood.

The Shortening of the Duardin

Another task was to stop the super volcano Vulcatrix’s Lair from birthing Gigadroths.

Another task was to endure a barrage from Dracothion.

To Brawl the God-King

The final task of Behemat was to fight Sigmar to a stand still, something that Ymnog previously failed.

During the Great Storm of Verdia, Behemat armored himself with the slab-like sides of the Nevergreen Peaks and challenged Sigmar so loudly that the forests shivered in fear. So scared were the trees that they now shiver whenever a storm gathers.

Only when Behemat began stomping Sigmar's people did the God-King engaged the World Titan. So bloody became the combatants that their blood formed the waterfalls of the mountains. Ultimately, Behemat was stuck on the chin with Ghal Maraz. While such a blow could shatter mountains, the World Titan was so though that he was not even killed. Stunned and reeling, Behemat stumbled away until he reached the Harmonis Veldt.

Still dazed, he ate much of the local fauna before vomiting up an entire generation of Gargants. This was his last great feat of propagation before finally allowing himself to collapse, landing so hard that he became embedded in Ghyran’s crust.

Gatherings of Gargants are nothing short of terrible catastrophes to the civilized races of the Mortal Realms. The Sons of Behemat struggle with complex words such as ‘cat-as-trophe’ and get stuck after the first two syllables. Instead, they simply call their gathering stomps.

These stomps are like primordial gods walking out from the mists of time capable of causing more damage daily than an entire army does over a months-long campaign. Each one is comprised of Gargants knowing each other enough, or hailing from the same family, to prevent infighting. 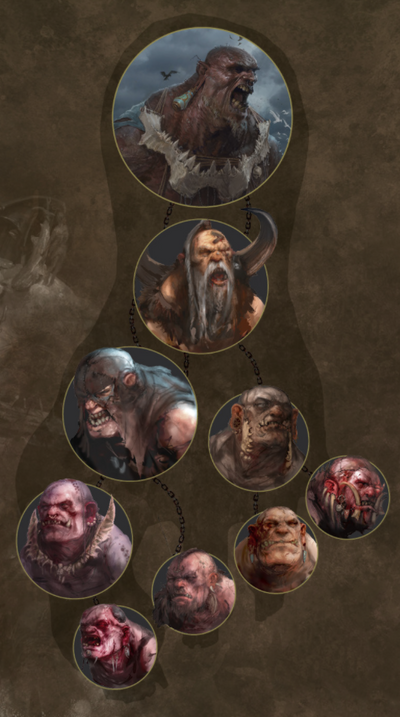 Stomps normally have no more than a couple of dozen members. A loose hierarchy or ‘stomping order’ defines each grouping, and these are based around the shape of a Gargant's foot.

Stomps take specific names based upon the type of their leader:

The largest or fiercest Gargant in a stomp is referred to as the Big Heel. Usually a Mega-Gargant, the Big Heel is the ultimate authority in the stomp and those under their rule often adopt his culture and tactics.

The other Mega-Gargants of the stomps are said to be Under the Heel. Usually having lost a fight with their Big Heel, they go along with them until they show weakness or are badly injured. On such an occasion leadership challenges take place.

These massive brutes form the main bulk of the stomps.

Inside a stomp, Mancrusher Gargants are known as the Footsloggas. Frequently considered expendable by the Big Heel, the Footsloggas emulate their Big Heel in their fighting style.

Mancrushers Gargants sometime gather in small groupings of their own. The number of Mancrushers Toeing the line under their larger masters varies considerably, normally from three to six. This organization is very loose, however, for Gargants can rarely count higher than three. 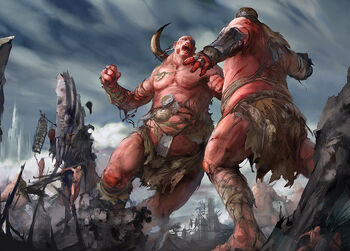 Being the parts of their anatomy with which they interact with the realms most frequently, feet are important to Gargants.

Punching is reserved for occasions when something tall must be knocked down. Disputes and leadership challenges are traditionally settled by a bare-knuckle brawl or a wrestling match. Bending down to punch smaller foes with their bare hands is effective, but it causes terrible back pains.