The unquiet Spirit Hosts bound to the masters of Shyish are beyond counting. Howling and wailing their immortal hatred for the living, these spectres can be summoned from places thick with the energies of death to fall upon their enemies in ghostly swarms, sapping the soul with every caress of their ice cold claws and stab of their grave-soiled daggers.[1a]

Spirit Hosts are the souls of the damned, stripped of body and identity, screaming endlessly for the life they have lost. They long to take out their rage upon the living, and the very touch of their claws can turn blood to ice, or stop a heart from beating.[2b]

Some of the most commonly encountered wraiths across the Mortal Realms are the Spirit Hosts. Even before the Shyish necroquake Spirit Hosts were known to stalk ancient cairns, battlefields or sites of horrific trauma. They rise out of the ground, mist-like, for they are the spirits of the damned, stripped of body and individuality and fused into a roiling mass of ethereal energy. Amidst the swirls are deathly faces and grasping talons that snatch out to grab and torment the living.[2a]

Spirit Hosts are amongst the lowest of spectral forms. They are clusters of souls merged into one spirit cloud, and like the bodies piled into a mass grave, they are devoid of any identity. All memory and form has dissolved save for a cold hatred of the living, for in mortal-kind they recognise a flicker of that which they have lost.[2a]

Spirit Hosts are deadly foes - their phantom weapons and raking claws rend not only flesh, but the soul as well. Their chill touch can pass through armour and bone to grasp organs or stab deep into vitals. When the processions muster for war Spirit Hosts flock to join them.[2a]

A unit of Spirit Hosts has any number of models, each armed with Spectral Claws and Daggers.[2b][4] 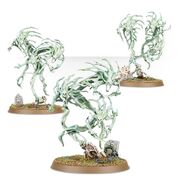 Spirit Hosts miniatures.
Add a photo to this gallery

Retrieved from "https://ageofsigmar.fandom.com/wiki/Spirit_Hosts?oldid=11909"
Community content is available under CC-BY-SA unless otherwise noted.