Immortal and vindictive, Nagash created Spirit Torments and Chainghasts to capture and watch over unrepentant offenders and - perhaps most importantly of all - to persecute them. Here are the gaolers of Shyish, the Keepers of the Keys and the fell guardians of the underworlds.[1a]

The masked creatures known as Spirit Torments were pitiless jailers in life. In death they seek out those that Nagash deems his by right of rulership, bludgeoning them with their ensorcelled iron padlocks before locking away their souls.[1b]

The Spirit Torments are the lords of the Great Oubliette of Shyish, a continent-sized underworld of dank cells and ice-cold dungeons. Known as shacklegheists to the elders of the Shyish Innerlands, they were once a rare sight in the Mortal Realms, but following the eruption of fell magic during the necroquake they have become far more common. Since the launching of the great processions the Spirit Torments have regularly joined the Nighthaunt forces.[1a]

Spirit Torments are entrusted with a duty Nagash considers vitally important, for it is their role to capture the souls of transgressors - in particular those that Nagash sees as having escaped their due fate. For this reason, Nighthaunt processions that are tasked with the hunting and capture of specific souls are always joined by Spirit Torments.[1a]

A Spirit Torment draws its victim's soul into its shacklegheist chains - heavy bonds forged of malefic iron and tempered by fell ritual. This chill metal acts as an enchanted jail, trammelling the life-force as soon as the attached lock closes tight. The spiritual energies cannot escape until the padlock is re-opened, an act that is typically done upon the procession's return to its haunting grounds in Shyish. There, the heavy arcane vessels are unlocked, delivering their contents into the clutches of a gaoler king, or perhaps a Mortarch.[1a]

The fate of a Torment-apprehended spirit depends upon the strength of the soul and the crimes that it committed in its mortal life. The majority are remade into lesser Nighthaunts, but some are instead trapped in a pocket of unreality linked to the Great Oubliette. A very few are instead reserved for some exquisite misery dreamed up by the ever-vengeful Mortarchs, or even Nagash himself.[1a]

While a Spirit Torment can collect any drifting soul that has been recently severed from its physical body, the cruel nature of the spectral gaolers means that they far prefer to be the agent of the separation themselves. With a groaning effort the Spirit Torment hoists up the jangling chains and begins to swing them. The heavy, lock-capped links whirl with impressive momentum, and should one connect, it will stave in a ribcage or a skull as easily as a direct hit from a cannonball.[1a]

Spirit Torments take pleasure in their dark work, though as much as they delight in ending lives and capturing souls, there is one aspect of their duties they enjoy above all others. The spiteful phantoms can peer into their padlocked prisons, gazing over the bright soul-stuff captured within. Then, they draw a great breath with a discordant howl, a chilling inhalation that steals hope, robbing the imprisoned spirits of energy even as it subjects them to nightmarish angst and dread.[1a]

Filled with the energies of the incarcerated souls, the Spirit Torments exude an aura of malevolence and despair. At times this malignant force can even be seen as pale, greenish wisps of spiritual radiance amongst which faces leer, taloned hands reach out to grasp, and agonised screams echo. To the living these emanations evoke purest terror, and are oppressive even to those who cannot see. To bask in such baleful phenomena is to be overcome with feelings of morbidity and gloom. To other Nighthaunts these harrowing energies are invigorating, driving the wraith-creatures on towards still greater acts of violence and spite.[1a]

There are many Spirit Torments, but some have earned great infamy. Karceris the Black-hearted was the gaoler of the Gristlespine tribes during the Chaos conquest of Morthaven. His misdeeds became legend, but near his end Karceris disavowed his past, attempting to cleanse his soul with penitent acts. It was not enough, and Nagash claimed him, naming him the phantasmal overseer of the Cryptopolis - the largest of the dungeons of Nagashizzar. Other Spirit Torments, such as Mawcrasp of Malendrek's procession or the Rusthaunt of the Crimson Procession, have earned their fell notoriety for the sheer number of souls they have returned to the great mausoleums of Nagash.[1a]

The Spirit Torments have been more active and seen further abroad since the coming of the Shyish Nadir, but they are rarely seen alone. They are accompanied by wraith-like enforcers and lackeys, the most common of which are the manacle-laden Chainghasts.[1a]

There are some - from Shyishan scholars to the astromancers of Azyrheim - who believe there is a correlation between the appearance of Spirit Torments and the Stormcast Eternals. Whether sheer coincidence, or symptomatic of cunningly laid traps, the appearance of Sigmar's Stormhosts - especially in Shyish, but also in other realms - draws an inordinate number of Nighthaunt processions containing one or more Spirit Torments. On battlefields where the two sides meet in open warfare, there have been multiple sightings of the soul-capturing wraiths using the power of their shacklegheist chains to prevent the typical return to the heavens of the slain Stormcasts. Surely, Nagash seeks to reclaim souls he sees as rightfully belonging to him.[1a]

A Spirit Torment is a single model. It is armed with Shacklegheist Chains.[1b][2] 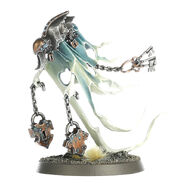 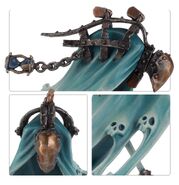