distinguished by the flickering energies that dance within its body and the guardian sword it wields in battle. Each Spirit of Durthu is a mighty warrior, and since time immemorial, Alarielle has formed them into her personal bodyguard, which she dubs the Sons of Durthu.[1a]

The Sons are tight-knit rootbrothers, podborn as echoes of the ancient and heroic ancestor after whom they are named. Their minds are full of the knowledge of battle, while their heartwood is infused with a sense of nobility, duty and determination that makes them perfect bodyguards. Every Son of Durthu is instinctively bonded to his brothers on a level so deep it is almost like a shared consciousness. Spirits of Durthu are intrinsically good beings, but their loyalty belongs absolutely to Alarielle. They follow her every command with selfless determination, and would gladly cutdown friend and foe alike were it necessary to protect the Everqueen from harm.[1a]

Spirits of Durthu are not mindless servants. Rather, the wisdom and lore that sings within them makes them ideal advisors to Alarielle. They act as her conscience, her warlords, and the agents of her will. The Sons of Durthu speak with Alarielle’s voice, bearing her authority amongst other sylvaneth and exercising it when they must.[1a]

Alarielle has not always listened to her bodyguards, and at times they have caused her great displeasure. The worst such occasion was during the darkest days of the Age of Chaos, in the years before Alarielle’s retreat to Athelwyrd. No one knows what caused the Everqueen to fly into a rage with her protectors, but rage she did, and with terrible curses, she banished the Sons of Durthu from her lands. Dismayed but duty bound, the Sons left their queen in a terrible exodus known as the Splintering, and scattered across the Mortal Realms. Some fell into a state of miserable hibernation, while others sought final death in battle rather than face their sorrow. Most wandered far, battling evil wherever it could be found and hoping that their mother would one day call them back. Summoning them was Alarielle’s first act upon her rebirth, and most of her lost protectors have answered her call. They quest back across the realms even now, more returning to Alarielle’s side with every passing day.[1a] 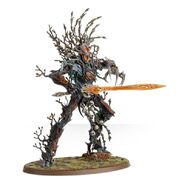 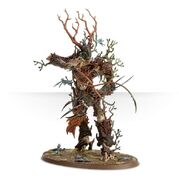 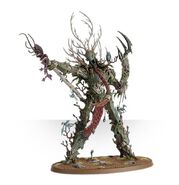 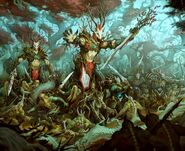 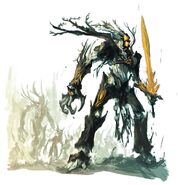 Retrieved from "https://ageofsigmar.fandom.com/wiki/Spirits_of_Durthu?oldid=7487"
Community content is available under CC-BY-SA unless otherwise noted.