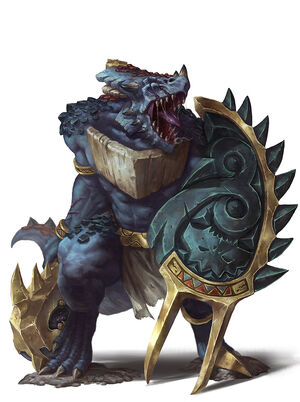 Brutal fighters, the Sunbloods are those Saurus considered by their fellow Seraphon to be avatars of an ancient reptilian god, now saturated with the power of Azyr. Their scales glowing with the light of the stars, their eyes blaze as they tear apart the servants of Chaos.

Burning with the azure light of the Celestial Realm, Saurus Sunbloods are steps away from being pure manifestations of the power of Azyr. Stronger than even the war-scarred Oldbloods, they wade through the ranks of their enemies, smashing them apart with weapons wreathed in halos of starlight whilst roaring their dominance to the heavens.

Sunbloods are Saurus that have grown in strength and power over long centuries of war, many of them heroes whose deeds date back to the Age of Myth. It is not just their skill in combat that has become legendary; their celestial forms have been exposed to the flames of war so many times that they now perceive an enemy’s weakness as other creatures might scent the blood of a wounded animal.

In battle, should a Sunblood single out a foe for destruction he will issue a blood-chilling roar. On instinct, nearby Seraphon warriors fall upon this weak link in the enemy line, tearing it to bloody ribbons.

Sunbloods are rare among the Seraphon. Some scholars believe they were the first Saurus to be called forth from the stars, and have existed almost as long as the Mortal Realms themselves, growing strong off the magic of Azyr. Others claim that the Sunbloods are an evolution of the Seraphon themselves, perhaps even the first step in a transformation into something new and as yet undreamt of.

The Saurus have a different understanding of the Sunbloods. They believe the Sunbloods are a fragment from their past, and a piece of the lost war deity of the Seraphon remade in celestial form.

To them, the Sunbloods are nothing less than avatars of battle, champions that walk upon the Mortal Realms with a single deadly purpose -- the destruction of Chaos and its followers. Whatever the truth, none can doubt the Sunbloods' terrible potency when they take to the battlefield, nor their depthless hatred of the Dark Gods.

A Saurus Sunblood is a ferocious exemplar of the saurus’ martial might, crushing armor with its Celestite War-mace and tearing through flesh with its Fearsome Jaws and drakescale Aeon Shield. As well as being a deadly weapon, the Sunblood’s massive Aeon Shield is almost impervious to damage.