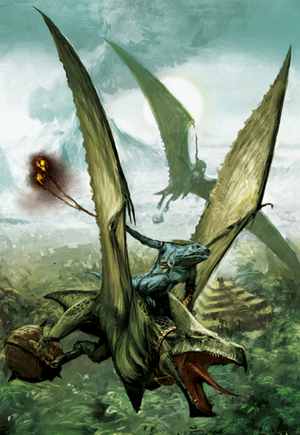 Swooping down from star-filled skies, Terradon Riders single out their prey with a hunter’s instincts. From the backs of their leathery-winged mounts, Skinks hurl blazing javelins and flaming sunleech bolas, causing havoc among the ranks of the foe.[1a]

Terradon Riders circle and glide above the Seraphon armies, summoned by the Slann to bring death from above. These skilled aerial combatants make for peerless scouts, often relaying information to the cohorts who march beneath their all-seeing gaze.[1a]

Clutched in the claws of each Terradon are great chunks of meteoric rock, snatched from the heavens and carved with arcane sigils of destruction. These deadly missiles are cast earthward as the Terradons swoop past, detonating in crackling blasts of celestial magic and reducing knots of enemies to charred ruin.[1a]

Some Terradon Riders wield bolas made from sunleeches – curious creatures burning with celestial energies that are harvested from the comets of Azyr. Whirling these weapons around their heads, the skinks can fling the flaming worms across short distances. Those unfortunate enough to be entangled by a sunleech bolas are swiftly transformed into pillars of fire as the squealing creatures burst, spreading the hungry flames to those nearby.[1a]

Few warriors of the Mortal Realms are as fast as the Terradons Riders. Racing across the skies on shimmering trails of celestial energy, they protect the Slann from aerial attack, and strike at those foes who remain beyond the reach of their terrestrial kin. Because of their prodigious speed, Terradon Riders often act as the heralds of the Seraphon armies when the call of the Slann is heard, breaking away from sailing comets like embers shed by a fire, then plummeting into battle with blood-chilling screeches. Enemies gazing up at the sky barely have time to react before crackling projectiles begin to detonate with their ranks – a sure sign that the gaze of the Slann has fallen upon them and the wrath of the Seraphon is imminent.[1a]

Some units of Terradon Riders throw Starstrike Javelins, while others wield Sunleech Bolas. Their Terradon mounts make low dives to attack with their Razor-sharp Beaks. The leader of this unit is either an Alpha or a Master of the Skies. A Master of the Skies is armed with a Skyblade instead of its ranged weapon.[1b] 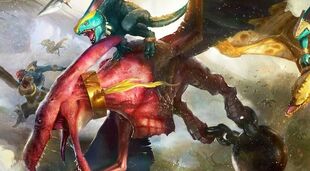 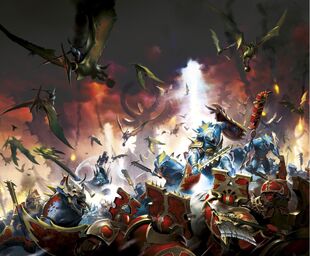 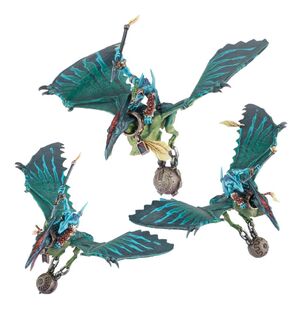