The Tomb Banshees are apparitions of revenge who have long dwelt upon the dark deed that robbed them of vitality, love or contentment, becoming bitter and hate-filled. A single scream from a Tomb Banshee can freeze the life from even the bravest warrior.[1b]

Those most betrayed or tormented in life find no succour in death, for they are drawn to an afterlife devoid of rest, filled only with mourning and vengeance. Known as Tomb Banshees, these embittered spirits are fated to shriek their wailing cries and haunt the material plane.[1a]

Many wielders of dark magic seek to recruit Tomb Banshees to their cause, for they are deadly opponents. The touch of these ghostly spectres is enough to stop a beating heart, and their chill daggers can pass through armour to deliver a mortal blow. Their most formidable weapon, however, is their scream. The howl of a Tomb Banshee can instantly kill, for it freezes the blood in their victims' veins. The cacophony is so painful it can rip a soul from its physical body. Only the bravest can withstand that aural assault and live.[1a]

Tomb Banshees are common within the Nighthaunt processions, where they drift between other spectral formations while delivering their spiteful shrieks to destroy the foe. Although they are most frequently reported as acting alone, there have been whispers following the recent eruption of undead invasions of several Tomb Banshees working in unison. At least five joined together - dubbed the Hellchoir of the Banelands - as part of the army of Baron Finalem. Their screams were instrumental in the successful reclamation of the great burial grounds known as the Vale of Remembrance. There are also tales of a Tomb Banshee leading a vast wave of Myrmourn Banshees, the most famous being the host out of Aqshy known as the Burning Scream.[1a]

A Tomb Banshee is armed with a Chill Dagger.[1b][2] 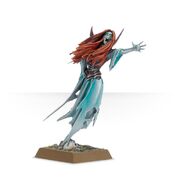 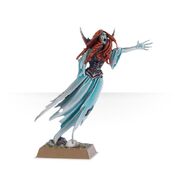