Age of Sigmar Wiki
Register
Don't have an account?
Sign In
Advertisement
in: Disciples of Tzeentch, Chaos, Tzeentch,
and 2 more

The Tzaangors are avian Beastmen who serve Tzeentch, their unnatural instincts and animal savagery augmented with a keen, if cruel, intellect. They are often covered in savage totems and carry weapons of bone, iron or crystal.

Tzaangor origins are as multifarious as the plans of Tzeentch themselves. Some are Gor-kin corrupted - or elevated, as they might say - by a Tzaangor Shaman; others might be humans who have undergone horrific rituals. Others still are beast-children, mutants born of human parents and left to die, but instead found and raised by Arcanite Cults. Regardless of source, all recognize that they have been blessed by Tzeentch.

Tzaangors are far more intelligent than other Beastmen, and they look down upon their beastkin, seeing themselves as evolved and their cousins as little more than brute animals. The strangely mutated minds of Tzaangors have become particularly attuned to magic and they are drawn to the arcane, seeking to hoard it. Tzaangors are also closely bound to the strands of fate, their animal instincts able to detect omens the way beasts scent prey upon the winds.

Tzeentch did not transform his chosen beastmen to seek magic alone - he also created them to kill. Many rituals prepare Tzaangors for war, culminating in the weapon-taking Tzaanwar, an unholy rite where the rent armor and broken weapons of foes are transformed into the resplendent gear worthy of fighters of Tzeentch. In battle the Tzaangor warflocks are led by a Twistbray champion, and they fight with savage skill, stabbing and hacking with curved swords or axes, as well as rending with horn and beak. As magical creatures they draw energy from the proximity of Tzeentchian sorcery and others of their kind – the more groupings there are of nine Tzaangors, the more savage they become.

Tzaangors whose deeds have caught the eye of their patron are rewarded with divine blessings. They are divided into two distinct groups, the Enlightened and the Skyfires, and are regarded by other Tzaangors as paragons of their bestial kind. Enlightened carry spears wrought of change-metal, and possess the strange ability to perceive echoes of past events around them. In combat many foes are driven mad as their darkest secrets are squawked out by the chattering Enlightened. Some Enlightened march to war amongst their lesser kin, inspiring them to greater acts of savagery, while others ride scintillating Discs of Tzeentch. Skyfires, however, exclusively ride upon Discs. It is their gift to see potential futures, but they can never speak of them. Skyfires are utterly silent bar the twang of their bowstrings as they loose their Arrows of Fate. Both groups are led by Aviarchs, the strongest and most cunning of their number.

Tzaangors can be found in every one of the Mortal Realms, where they live in the wild places, choosing locales rich in magic to raise their strongholds. There, Tzaangor Shamans tap into the magic to raise flux-cairns, which become repositories of stolen arcane might. Flux-cairns are surrounded by lesser herdstones – glyph-inscribed monoliths shaped in symbols sacred to Tzeentch. The longer a flux-cairn remains in place, the more the lands about it change. It is the Tzaangors’ goal to use them to warp entire kingdoms, and eventually the realms themselves.

Each unit of Tzaangors fights with a variety of weapons; some of the Tzaangors are armed with Paired Savage Blades, whilst others carry a Savage Blade and Arcanite Shield. Two in every five models in the unit can be armed with double-handed Savage Greatblades. No matter what they carry in their hands, all can also tear at the foe with their Vicious Beaks.[1]

Favored Tzaangors are sometimes honored with bearing their god’s icon to war. These ornate totems can absorb the magical energies of nearby spellcasters, and are used by the Tzaangors to steal the arcane force which they use to grow their flux-cairns. 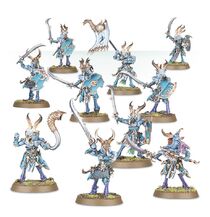 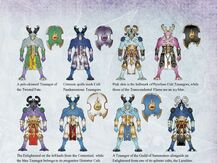 Tzaangors come in many colours and shades.