Bold raiders and expert scouts, the Vanguard-Hunters are tireless in their quest to slay the followers of Chaos, always striking from the perfect angle and leaving their quarry reeling in confusion.

The Vanguard-Hunters are the elite infantry of the Vanguard Auxiliary Chambers. Most among their number are battle-hardened veterans, having been honoured with the role of Ranger upon their second Reforging. Unlike the swift Vanguard-Palladors or the sharpshooting Vanguard-Raptors, the Vanguard-Hunters are tactically flexible and experts at utilising the terrain to their advantage. Theirs is not the domain of stealth and subterfuge, however, but of daring raids and brazen guerrilla warfare that requires them to relocate constantly. More than once has a keep's gatehouse been stormed by a unit of Vanguard-Hunters who scaled its walls during the confusion of battle, or an artillery battery been ambushed and destroyed in what its crew believed to be the perfect defensible position.

More so even than the other Rangers, Vanguard-Hunters will often spend prolonged periods of time in any given theatre of war, building up an intimate knowledge of their environment. This alone would make them excellent forward scouts, but there is one curious artefact which elevates their fieldcraft to supernatural levels: the astral compass. Devised by the wizards of the Collegiate Arcane in Azyrheim, this strange contraption allows the bearer to deftly navigate the impossible geometries of the Mortal Realms. In the hands of a Vanguard-Hunter, it becomes an invaluable tool that enables their unit to attack the enemy from the direction they least expect. The Tzeentch Arcanites in particular have grown wary of the Vanguard-Hunters, for they find that their strongholds - normally unassailable because of their unfathomable design - are penetrated by these Stormcasts with an ease that confounds and infuriates them.

The weapons carried by the Vanguard-Hunters are well suited to their role within the Stormhosts. Heavy-bladed swords and short-hafted axes are as effective at hacking through brush and briar on flanking manoeuvres through dense terrain as they are the flesh of the servants of Chaos. Boltstorm pistols, meanwhile, are ideal for firing on the move, allowing the Rangers to provide supporting fire for their allies while they themselves rapidly get into position, or to run down isolated targets and destroy them in a focussed volley of crackling missiles. 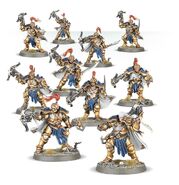