With keen and expert aim the Vanguard-Raptors hunt their quarry. Aided by the enigmatic Aetherwings, they loose lethal precision shots from vantage points unseen.

The Justicar Conclave of each Vanguard Auxiliary Chamber is wholly comprised of Vanguard-Raptors; cadres of reclusive marksmen who bring formidable ranged support to the battlefield. The Vanguard-Raptors are the first gust of the hurricane, raining death upon the enemy before the storm winds strike in full.

The Vanguard-Raptors are utterly focussed on their battlefield role, and have honed their skills through tireless campaigning. Yet for each warrior there lies a natural path. For some Vanguard-Raptors, the instinctive hunting mode is close and immediate, supporting their allies with rapid bursts of firepower. These warriors wield hurricane crossbows capable of delivering withering salvoes directly into enemy battle lines. Tipped with heavenly sigmarite, their bolts can punch through plate and bone alike, throwing the most disciplined ranks into disarray. For others the favourable strike is that which is well timed and unheralded, and for this role the fearsome longstrike crossbow is the perfect weapon. Poised in remote firing spots, Vanguard-Raptors so armed are easily capable of dispatching priority targets with a single ruinous bolt. So uncanny is their aim that some attribute their preternatural accuracy to the influence of the Aetherwings soaring high overhead.

Wherever a Vanguard-Raptor hunts, a noble Aetherwing is never far away, scouting deftly above the fray or swooping to defend the Stormcasts with beak and rapacious claw. The bond between these birds and the Vanguard-Raptors is truly fraternal, each respecting the other as a natural predator. In temperament too the parallels are great, for like the Vanguard-Raptors, Aetherwings are creatures apart, preferring to keep their own counsel. Their native haunts are the highest crags of the Sidereal Mountains in Azyr, and it is here too that the Vanguard-Raptors make their lodging, farthest of all the Rangers from the lights of Sigmar's greatest cities.

It is a rare thing indeed for Vanguard-Raptors to descend from their high eyries and walk the streets of Azyrheim, and when they do so they carry a distant and mysterious air. But never long do they tarry, as the nesting places of the Aetherwings must always be watched, for reasons no Vanguard-Raptor will tell. 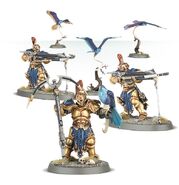 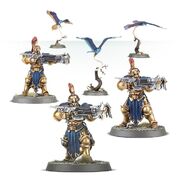