High King of the Deep

Alive
He was the first of his kind, and is the last of the Cythai still alive. All Ionrach bow before him, their one acknowledged leader, the eldest and greatest of their race. He is Volturnos, High King of the Deep, and he holds undisputed authority at the Idoneth's assembrals.

The greatest warrior of the Idoneth still leads his people, a position he earned during the Age of Myth. Volturnos once stood before the blinding light of Teclis himself, receiving firsthand the eolas, the great gift of learning and magic that the god bestowed upon the newly created aelves.

Unlike many, Volturnos survived Teclis' light of truth and fled Hysh with his comrades. At the founding of the Ionrach capital, Priom, Volturnos was already building a reputation as a warrior and leader. He eventually won his Kingship through his actions at the Battle of the Flotsam Isles, where he was instrumental in the destruction of several greenskin fleets.

During those times, while the Idoneth continued to expand their territories, the Awakened died one by one. Although long-lived, they gradually perished in battle or fell victim to sea monsters. Some few succumbed to old age, their souls carefully stored within the chorrileums. Yet Volturnos lived on, growing wiser and more cunning, whilst his taciturn manner and calculating mind made him an ideal commander.

According to the legends, Volturnos was the very first of the souls rescued and remade by Teclis. He was to be the archetype of a new race - noble, erudite and fair to look upon. Not all Idoneth enclaves believe such tales, and some of the more recalcitrant factions, most notably the Dhom-hain and Fuethan, are openly dubious about them. They respect Volturnos as an Akhelian King of renown, but nothing more. The Ionrach and their many branches, however, revere their High King, holding a day of remembrance for the Ambush at the Umbral Sea, recalling the duel in which he lost his eye. The Nautilar tell the tale of how Volturnos arrived at the head of an Ionrach-led coalition to break the Siege of Grystleback, the greatest threat to ever beset their great city. To the Briomdar he is the Avenger, for he has in the past aided them by punishing those who have inflicted heavy losses upon the enclave.

The King of Kings

When he takes to the field, High King Volturnos is a majestic presence among the battleline of the Idoneth Deepkin. He rides to battle atop Uasall, a prince amongst Deepmares, and the mere sight of Volturnos' back banner - the crest of the High Kings - sends a surge of pride coursing through all those who fight beneath him. A leader of legendary status, it is said that none can read the flow of battle better than Volturnos. Yet the High King is not content to command troops from afar. In combat he bears the Astra Solus, whose name means 'blade of light'. It is a sword that was gifted to him by none other than Teclis, but there is speculation as to whether the mage-god forged the blade himself or came to possess it through some other means. When swung, the Astra Solus cuts through armour and the scaled hides of sea monsters with ease, and leaves a blazing trail of luminescence in its passing. For protection, Teclis gifted Volturnos with Cealith, a shield that has the ability to swallow hostile magics, rendering them null. 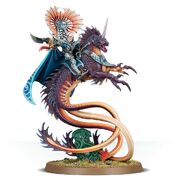 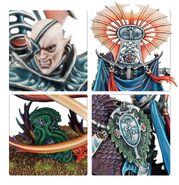 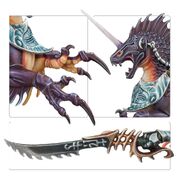