Vulkite Berzerkers are rightly feared by their enemies, and

their exploits in battle are known across the realms. Through smouldering beards, they grin their disdain for the foe as the light of Grimnir burns in their eyes, and they laugh at their enemy’s foolish attempts to spit them upon blade and spear.[1]

Fyreslayer lodges are built upon a foundation of skilled warriors and martial pride. From these traditions are born the Vulkite Berzerkers. When a lodge marches to war, it is these stubborn warriors that make up the bulk of its fyrds, and it is by their bloody toil that enemies are broken and mighty armies ground into the dust.[1a]

Roaring war cries at their foes, fyrds of Vulkite Berzerkers live up to their name in battle, ploughing through anything that stands in their way. In a whirling maelstrom of flashing axes and blazing golden runes, they fight on, for neither the searing heat of Aqshy nor the chilling winds of Shyish can sap their strength. Nothing less than a devastating wound slows them down, and many are the stories told across the realms of Vulkite Berzerkers hurling themselves through the fray with blades and arrows protruding from their flesh, their battle-rage undimmed.[1a]

Some Vulkite Berzerkers favour twin fyresteel axes, the better to fell as many foes as possible. Axes flung wide, they spin around, claiming limbs and heads in a terrible storm of death and destruction. Others wield fyresteel war-picks and bladed slingshields. These shields are far from being purely defensive – a Berzerker can hurl his shield at his target as he closes, ripping it free from their ruined corpse only once he is deep in the ranks of the foe.[1a]

The distinctive, sonorous blare of a horn of Grimnir heralds the charge of a Vulkite Berzerker fyrd. Potent relics of the forge-temples, these instruments are said to contain the booming voice of Grimnir himself. As the horn’s sound echoes across the battlefield, runes blaze bright and every Fyreslayer feels his god’s spirit stir within him.[1a]

Some units of Vulkite Berzerkers are armed with Fyresteel Handaxes or War-picks and carry Bladed Slingshields, while other units fight with a Fyresteel Hand axe in each hand. Some also carry well-balanced Fyresteel Throwing Axes at their belts.[1b] 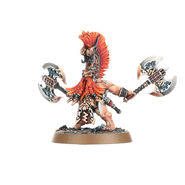