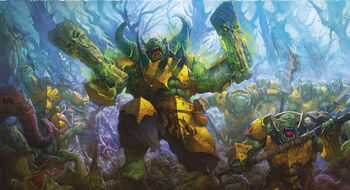 Warchanters are the rabble-rousers of the Ironjawz and the closest thing they have to priests. Touched by the greenskin god, they hear a constant thumping hammering away in their heads. Ironjawz believe this is the twin heartbeat of Gork and Mork, which the Warchanter then drums in an endless, brutal rhythm with anything they can get their hands on. The heartbeat of Gork is slow and steady, a mighty thumping like the footsteps of a great beast loping toward its prey, while the heartbeat of Mork is fast and wild, echoing the stampeding feet of countless Orruks as they charge into battle. Thee beating rhythm of the Warchanters accompanies the Ironjaw mobs tower and fills their enemies with fear. Sometimes, when Warchanters gather in mobs, the beat in their heads will grow louder and more violent until the ground shakes with the combined sound of their stikks. At these times, the greenskins think Gork (or maybe Mork) is speaking directly to them, and the message is always the same: go out and smash more faces.[1a]

Warchanters are the rabble-rousers of the Ironjawz warclans. Crazed followers of Gorkamorka, they hammer out the echoing drumbeat of war with their stikks. The beat calls out to the brutal minds of the Ironjawz and resonates with the energy of the Waaagh!. Driven by the violent rhythm constantly pounding between their ears, a Warchanter will use anything they can to smash out the beat, be it their hitting stikks, bits of mangled iron, enemy skulls or even their fists thumping the faces of their victims. Enemies seldom realize that their screams are adding to the Warchanter’s beat.[1b]

Every good Megaboss has a Warchanter or two somewhere in their warclan. Whether this is because Megabosses are drawn to the thumping beat of the Warchanter, or the Warchanter is attracted by the thrumming Waaagh! energy of a big boss is unclear, though the effects of this savage union are undeniably effective. Truly impressive Megabosses like Gordrakk, the Fist of Gork, have scores of Warchanters moving amongst their Waaagh!, ensuring that a constant stream of Ironjawz are piling into the boss’ force, and every greenskin warrior is riled up and ready for war.[1b]

The effects of a Warchanter upon the Ironjawz are terrifying to behold, as hordes of already belligerent Orruks stamp their feet and bash their choppas on their armor to the time of the beat, before they hurtle screaming into battle. Such is the mystical nature of the beat that its influence reaches even beyond earshot. Warclans are able to sense the thumping from leagues away, as if it were carried on the wind or vibrating through the ground. For this reason, Warchanters are extremely valuable tools for Megabosses who are trying to replace casualties and grow their warclans.[1b]

Warchanters smash out rhythms on the skulls of their foes, hitting them with a Gorkstikk in one hand and a Morkstikk in the other.[1d] 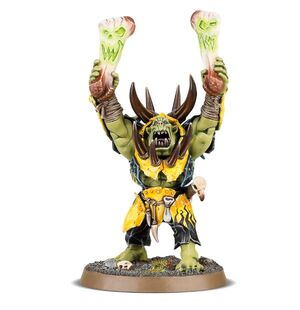 Retrieved from "https://ageofsigmar.fandom.com/wiki/Warchanter?oldid=11748"
Community content is available under CC-BY-SA unless otherwise noted.