Warhammer Underworlds: Shadespire is an action-packed combat game for two players. Build your warband, construct your deck, and defeat your rivals.

Shadespire was once a city of wonder and magic, a mercantile metropolis whose rulers defied death, to the fury of Nagash. This fury was made manifest in something worse than destruction – drawing upon the mysterious power of the shadeglass that gave the city its power, Nagash tore away the light and glory of Shadespire, leaving it a twisted reflection of its former splendour. Those adventurers foolish enough to set foot within its walls are trapped, with all hope seemingly lost. Yet not all will accept their fate without a fight…

In Warhammer Underworlds, you and your opponent pick a warband – 2 are included in this box – and build a deck of power and objective cards. After placing your warband on the hex-tiled game boards, you take turns making actions – movement and attacks – until 3 phases are played. Between actions, you can use the power cards to introduce effects and reactions that can swing the battle in your favour; building the best deck you can and using cunning to deploy these abilities at the perfect time is the secret to mastering the game and dominating your foe. Merely vanquishing your opponent’s warband does not guarantee victory – capturing objectives, standing your ground, making the best tactical choices and deploying the right cards at the right time will gain you the glory points you need to win!

Once you’re familiar with the rules, games will take around 30 minutes – you’ll always have time for a rematch.

Everything you and a friend need to play games of Warhammer Underworlds is included in this box. Contained within:


- A Stormcast Eternals warband, made up of 3 push-fit, blue plastic Liberators (Angharad Brightshield, Obryn the Bold and their leader Severin Steelheart);
- A Khorne Bloodbound warband, made up of 5 push-fit, red plastic Bloodreavers (Karsus the Chained, Blooded Saek, Targor, Arnulf and their leader Garrek Gorebeard.) Both of these warbands are Easy To Build, with no glue necessary and a comprehensive, easy to follow construction guide;
- A 32-page rulebook, including the story of Shadespire’s rise and fall, and all the rules you need to play; - A quick-start sheet, featuring a brief introduction to the game;
- 2 double-sided game boards, featuring hexes and objectives;
- 2 pre-built decks of power and objective cards, for use with the included warbands;
- 8 double-sided Fighter cards, providing the stats and information needed for the fighters in each warband at a glance;
- 5 attack dice and 3 defence dice;
- 9 double-sided objective tokens;
- 1 Katophrane Artefact token;
- 2 Shardfall tokens;
- 30 wound tokens;
- 46 double-sided glory point tokens;
- 15 double-sided move and charge tokens;
- 15 Guard tokens;
- 8 activation tokens. 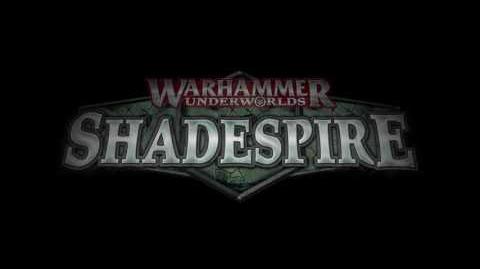 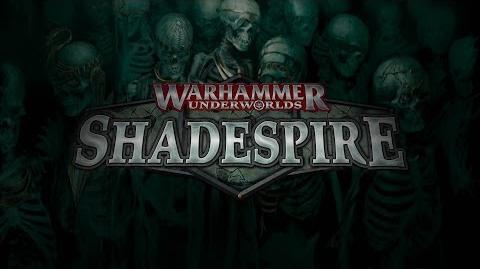