The heart and soul of the Daughters of Khaine are the warriors known as Witch Aelves. Bloodthirsty and eager zealots, they fight at the forefront of nearly every war coven, seeking to lose control in the wanton frenzy of battle to better honour their violent god.

Witch Aelves are devotees of Khaine, their entire lives dedicated to serving their bloodthirsty deity. In stoic fashion they train endlessly. Weapons practice and mock duels take up the majority of their daily lives, yet these are not mere military drills, but religious ceremonies, treated with all the gravitas that other cults might use when reading their most holy of tomes or offering prayers to their god. For Witch Aelves, ritual combat hones martial prowess and sates a craving for violence, while duels fought against prisoners, captured beasts or gladiatorial opponents offer a chance to spill blood. However, it is only in battle where the followers of Khaine can truly immerse themselves in the holy rapture that bonds their souls with Khaine.

Witch Aelves fight with long daggers known as sciansГЎвЂ“ steel blades tempered in blood and blessed by the Hag Queens. The sciansГЎ is a holy tool for the worship of Khaine. Its razor-sharp edge slices easily through flesh, while some bear a notch that, with a subtle twist, causes maximum pain and profuse bleeding. Whether wielded in a pair or accompanied with a bladed buckler, a Witch Aelf weaves her sciansГЎ in a blurring flurry of deadly attacks.

Before battle it might be said that Witch Aelves are staid, reserved or even cold, but in the midst of combat all of that is left behind. With an explosion of movement, Witch Aelves spin, feint, dodge and pirouette, twirling their blades in an increasingly violent dance. Steady voices become shrill with battle-lust and chants become shrieks. The presence of High Priestesses of their order inspire them to greater acts of carnage still, as does their own vicious bloodletting. As a Witch Aelf battle line devolves from an ordered march to a whirlwind of stabbing and slicing, they truly lose all self-control. Still-beating hearts are ripped from victimsвЂ™ chests and flesh is daubed with gore-red runes. Dancing like pale shadows the Witch Aelves weave a scarlet path through the orgy of destruction, revelling in the spray of jetting arteries. 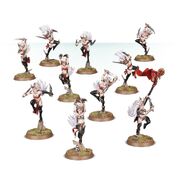 Retrieved from "https://ageofsigmar.fandom.com/wiki/Witch_Aelves?oldid=8847"
Community content is available under CC-BY-SA unless otherwise noted.